Lucasfilm VP and Executive Creative Director Doug Chiang is responsible for a lot of the designs you saw in the Prequels, as he was the Creative lead on those films. Now he’s a big wig at Lucasfilm, but that hasn’t stopped him from drawing characters from the Prequel era.

In fact, you can now take a minute and Zen out while watching Doug draw a B1 Battledroid on a digital device. It’s a very serene experience, and one I recommend if you need to take a breather today. It’s very peaceful and relaxing, and it shows how damn talented certain humans are. It’s mind boggling to me to know that someone drew this thing with their hands, it just doesn’t compute to my non-artistic brain.

Anyway, head on down below to get your Star Wars meditation on. 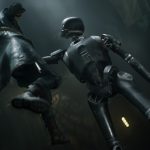