The first six episodes of the new Star Wars Galaxy of Adventures web-series are now available to watch, and if you’re a Star Wars fan, or have younglings that you want to be fans, or at least help them understand why you’re a fan, then you must watch them. If anything else, the art style is to die for thanks to its anime-style, which puts forth a vibrant presentation with over-the-top animations.

So let’s get on with the shorts. Up first we have one starring Luke Skywalker. It’s a modified look at his journey on Tatooine that led to him to becoming one of the most legendary Jedi of all-time. It’s a great example at what these Star Wars Galaxy of Adventures shorts are all about, and after watching it you’ll realize you just saw the coolest interpretation of Luke’s landspeeder yet.

Up next is easily my favorite short so far, and that’s because it features Darth Vader. In particular, it recounts his Dark Side powers by showing him kicking the living crap out of some Rebels in what looks like the end scene from Rogue One. Vader was meant to be animated in this visual style, because he looks even more badass and cool than his live-action self, as well as his other animated versions.

Luke also stars in the next short, which provides a slightly different take on his encounter with a Hoth Wampa. It mostly plays out like it does in Empire, but things end a bit more explosively.

The droids star in the next short, well R2 does mostly, as it provides an alternate take on their escape from the Tantive IV in A New Hope. I actually appreciate the artistic liberty being taken on these shorts, because while they’re mostly in line with how the scenes played out on film, there are slight alterations that gives us fans a different perspective or view on a scene, so I dig the tweaks.

The next clip is the most unique of the bunch, because it mixes in soundbytes from Empire, but it features an entirely new scene involving Han and Chewie. Their being chased by an Imperial Star Destroyer while trying to fix the Falcon, which isn’t a scene in any of the live-action Star Wars films. It’s still a fun short, because it plays off the fact that Han and Chewie are always repairing the Falcon.

My second favorite short, which also stars Darth Vader — I’m a fanboy, what can I say — is similar to the one above in that it doesn’t retell a particular scene from the Star Wars films. Rather it just focuses on the might of the Empire, and how Darth Vader leads their war machine against those who oppose them in the galaxy. This one, like the other Vader one, also features some killer looking visuals, especially when the camera pulls into Vader’s face and you can see all of the reflections and lighting.

Stay tuned for more episode of Star Wars Galaxy of Adventures, which will continue in December, and then become a weekly series in 2019. 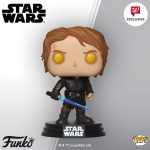