DICE has put out a short teaser video that features Anakin Skywalker in Star Wars Battlefront II confronting Count Dooku. The video was released to tease the Chosen One update.

The Chosen One update is scheduled to go live sometime next week, and as mentioned it will add Anakin to the game’s roster of Hero characters. In addition to his lightsaber skills, Anakin will have four abilities for players to use to take advantage of his mastery of the Force. Quite frankly though, the best part about Anakin’s inclusion in the game is that one of his built-in voice lines is, “I don’t like sand. It’s coarse and rough and irritating…and it gets everywhere.”

Now that could be one of the cheekiest moves by DICE ever, and it will surely make Star Wars fans laugh, as it’s considered one of the sillier lines to ever be spoken in a Star Wars movie.

You can read up on all of the stats for Anakin over on DICE’s community update page. Check out Anakin in action below. 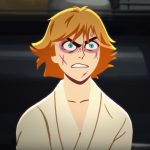