EW has dropped a massive inside look article for Star Wars: The Rise of Skywalker, and for those of you who don’t like to read and comprehend written words, I’ve gone ahead and created a video to summarize the article’s main bullet points.

There are also eight new stills to discuss, and three EW covers that portray all three phases of the Skywalker Saga.

Head on down below for all the TROS insights!

Hey now Skywalker Saga fans, Matt Heywood here from the Star Wars Time Show to highlight some of the key points from EW’s TROS inside look, which featured informative quotes from JJ and his cast.

I still highly suggest checking out the full article, which is linked below, but if you just want the key insights, you’ve come to the right place.

Let’s start with J.J. Abrams himself, who is still frantically working on the final cut of the movie, but he explained that the production is in a much better spot that The Force Awakens at this point in time.

Apparently, TFA required way more reshoots than TROS, and had less story adjustments than TFA too. This is due to the fact that JJ and his cast and crew weren’t noobs this time around, so they all knew what worked, but JJ reminds us that this doesn’t mean TROS wasn’t challenging. According to him it was due to how much larger and ambitious its story is.

J.J. went on to say that while the trailers have shown off all sorts of surprising moments, they haven’t even scratched the surface yet, and that we have yet to see content from a few major action sequences.

That’s impressive considering what has been shown, which includes a shot of Rey staring down Palp, Rey and Kylo inside the wrecked Death Star, and of course Dark Rey.

The article also featured some choice quotes from Oscar Isacc and John Boyega. Isaac made it clear that Poe and Finn have been sent on a mission to find allies throughout the galaxy, but they’re striking out.

He also explains that the year time jump between TLJ and TROS has allowed the characters of Rey, Poe, Finn, and the others to train together and become a legit strike team of sorts.

Both Oscar and John also mentioned that they got their wishes for their characters in this film, and that each will be doing something different than what we’ve seen them doing in the past.

Poe will be spending much more time out of the cockpit in TROS, and actually get to go on adventures with the group, while Finn will be shown as a more capable soldier, and less of a comedic goof ball.

Boyega also explained that TROS pays off on Finn’s TLJ arc, and that it will bring out a side of Finn that we haven’t seen yet.

John also talked about how J.J. encouraged the leads to improvise their dialogue to make scenes and their bonds feel more natural.

Although, during this reveal, Isaac almost let something slip about Rey, when he mentioned that Rey has something, but he stopped himself, before saying, “Rey is driving her own thing, she’s not doing what other people are telling her to do.”

It sounds like she’s got her own secret side mission, possibly to find out more about her parents, but the fact that Isaac had to stop himself means it’s probably something massively important to the plot.

We also got some more insights into Rey from Daisy Ridley. We should expect a much more powerful Rey, but she’s still not overly confident in her skill set.

According to JJ, we will see Rey use other skills too, some she learned being a scavenger on Jakku, so she won’t just be a one trick Force power pony.

It’s also going to be emotionally heavy for Rey, because Daisy said some shooting days were tough to get herself in Rey’s headspace thanks to how deep her emotions get.

Speaking of which, some of those emotions will still be centered on Rey’s parents, because like some Star Wars fans, Rey isn’t satisfied with Kylo’s reveal about them being drunks. Rey will still be trying to figure out where she came from. Daisy said it’s not that Rey doesn’t believe Kylo, she just feels there’s more to the story than he’s let on.

Adam driver also dropped a few quotes in the piece, and mentions that Kylo killing Snoke was a birth moment for the character, because he now feels like his own person.

He also addressed the Rey-Kylo bond, and how it’s not just one thing, but many, in terms of them at times hating each other, then needing each other during others.

Finally, Anthony Daniels chimed in about 3PO’s role, and how its the droids most important since A New Hope. He confirms that we will see 3PO in ways that we’ve never seen before, and that it will come off as refreshingly new.

Daisy also said that Rey and 3PO may spend more time together than Rey spends with any other character in the film, which is very interesting.

That’s what I got for you in terms EW’s TROS inside look, but before we go, here are a few new stills that EW released, as well as three collectible covers. 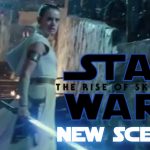