It’s time for a new Star Wars canon update courtesy of the latest issue of the Darth Vader comic from Marvel, which clocks in as #7.

You can check out our new canon and Easter egg breakdown of the issue below.

Darth Vader # 7 2020 is out now, and it continues Vader’s punishment that kicked off in issue #6, albeit with some cool new canon moments and an appearance from a cut character that was supposed to be influential in The Rise of Skywalker.

The issue kicks off with a great nod to events that took place during Revenge of the Sith. We see the crippled Vader enter into the same Techno Union bunker that he did before his fight with Kenobi back in ROTS.

Hell even the same mouse droids were there, so these panels offered up some great Easter eggs. Including this vision of him murdering Younglings and Seps, and this lovely corpse of Nute Gunray. Poor trade route blocking Nute.

Now what happens next is what I consider to be some interesting new canon. Vader, after beating up a mouse droid, is assisted by said mouse droid and friends with his limb repairs. And what’s even cooler is that they use scrap Battledroid parts to rebuild the Dark Lord of the Sith. I mean you have to appreciate our boy with a big ass B2 arm attached! Now that is a strong pimp hand if I say so myself.

Unfortunately for Vader, while he’s repairing himself Ochi shows up to kill him, but instead we get some pretty awesome and badass looking Vader art as he springs his own attack.

I will say that I think the tip of Ochi’s spear is the same blade that we saw in TROS, or he just likes that style of metal work.

Anyway, even with Battledroid parts Vader makes quick work of Ochi, which results in some more amazing looking art in this issue.

While these two keep talking smack to each other about how strong Palpy is, Vader starts to hear a voice calling out to him, even though he’s still not using the Force himself to reach out.

Ochi tries to block his path, but he gets into the cave where the voice is coming from, and we soon learn that the voice is none other than The Eye of Webbish Bog, who was supposed to be in TROS during the opening talking to Kylo on Mustafar. This issue makes that cut scene feel like even more of a bummer now, especially when you consider that Vader, Kylo’s hero, also worked with the Bog to find some answers about his destiny.

And that’s that, another awesome issue of the Vader 2020 comic run. 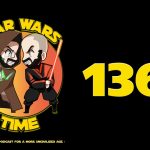 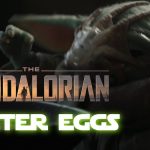