This week’s epic Star Wars Galaxy of Adventures short is rather unique, because it doesn’t try to retell an iconic moment from a Star Wars movie, rather it tells a brand new awesome story about Vader’s impeccable piloting skills. Although, I do think it still uses a few soundbites from the Battle of Yavin.

Either way, this could now be my new favorite GoA short. I mean it is badass on multiple levels. First, it shows off how insane Vader was as a pilot, a skill he mastered at a very young age while he was still Anakin Skywalker. Second, it does so in a way that makes Vader’s feats look even more grandiose. I just love the anime-style visuals, especially during high-octane action sequences. It just makes this short pop, and Vader’s piloting skills even more badass looking.

Moments like this have been featured in Star Wars comics, so it was nice to finally see Vader’s true potential play out in animated form. If only we could get this in live action form! Darth Vader: Star Wars Story times 10 please! 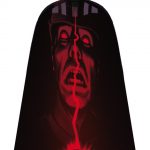