The critically acclaimed Vader Immortal VR game series will be leaving its Oculus exclusivity behind as it jumps over to the PlayStation VR platform this summer.

All 3 episodes of the series will be available immediately on PSVR, so there will be no staggered release like there was on the Oculus platforms.

The game follows a force sensitive smuggler that finds themselves trapped in Vader’s castle on Mustafar. Players will learn about the Force through the game and also get to learns the ways of the Lightsaber in the Lightsaber Dojo.

Keep an eye out for this awesome series on PSVR this summer! 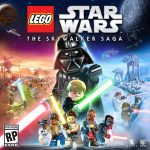