We’ve got your day late and dollar short recap and new canon report for Vader #12, which also crosses over with the seemingly ultra-rad War of the Bounty Hunters mini-series. You don’t want to miss out on that event, but for now, head on down to see what our buddy Darth Vader is up to after getting his ass handed to him on Exegol by the Emperor.

Hey now Star Wars fans who get down with comic book lore, sorry for the delay, but I’m finally here to break down the latest issue of the Vader run, which also happens to crossover with the kick ass war of the bounty hunters mini-series that kicked of in full this week. Make sure your subbed to the channel for the breakdown on that one, but for now, let’s see what Vader is up to and what new lore we have to explore.

The issues opens with the now defeated and subservient Vader returning to Coruscant for a little tune-up after he realized that Palpatine’s power through Exegol is way more badass than he ever imagined.

What I loved about these early panels is that it setup how brutal Palpatine just treated his buddy, but it also shows you how much of an angry badass Vader is. I mean dude stays awake to have his body chopped apart and repaired just so he could keep feeling the pain and suffering that he knows makes him stronger.

It was also fun to listen to Palp keep shit talking him to his advisors who were worried that his latest round of torture may lead Vader to try and kill him, but he laughs it off like a true master planning boss.

Anyway, while he’s being repaired to feel pain, he re-centers his focus on his son, and how his son may be strong, but he’s still a puss because he’s never done anything great on his own.

He highlights the fact that it was Han Solo that actually saved Luke’s as at the DS1 and allowed him to blow it up, and not Luke on his own, so he flashes back to a time period right after that event to show us what he was up to to try and further weaken his Son’s nightside ambitions.

It turns out that Vader hunted Han and Chewie after A New Hope on Corellia, and if it weren’t for the fact that the planet had a shipyard just for ships that were the same model as the Falcon, Vader would’ve wiped them out.

It was a nice little touch to Vader and Han’s contentions relationship, which we saw play out further in Empire when he again uses him to try to get to Luke by torturing him and freezing his ass.

The issue comes to an end back in the present timeline and Vader is all patched up and ready for a new mission. As a side note we also got to see how Ochi got his big black glass looking eyes we saw him with in TROS, which is a result of surgery after eating some Sith force energy on Exegol.

The odd couple of Vader and Ochi head out in search of the now lost Solo, which is the point where this issue links up with the War of the Bounty Hunters thread, and based on the ending, both Vader and Ochi are now also in the mix when it comes to the factions hunting for Solo’s slab.

Oh, and just in cased you missed it, but they link up with a buff AF Hutt named Bokku. Who knew that some Hutt’s could be more than just oversized slugs? Not me!

And keep those notifications on because I have another new SW comic breakdown coming and it’s loaded with some awesome Solo movie connections and more badass Fett moments. 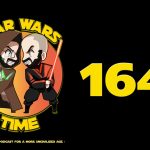 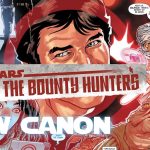