Disney has released a hype trailer for Disney Plus Day 2021, and among the quick-looks for the planned releases for the big day, Star Wars fans will find the official title for the Boba Fett special that was teased a few weeks ago.

The special is called Under the Helmet: The Legacy of Boba Fett, and based on a few quick shots of it, it does look to be a retrospective look at the character to prep more casual fans on the bounty hunter before the debut of The Book of Boba Fett.

There didn’t appear to be any footage from The Book of Boba Fett in the teases, rather the shots seemed to be from BTS footage from the OT and Special Edition shoots. There’s also a few shots of Fett on stage at what must have been a Star Wars Celebration, or another fan event, because he’s eventually greeted by Warwick Davis, a MC staple at these types of events.

While there’s still a chance that fans will get a peek at The Book of Boba Fett on Disney Plus Day, the special appears to be more focused on the character’s past and previously covered tales versus detailing the new show itself. Here’s to hoping we get a bit of both on November 12!

Nick and I will talk more about this special on today’s episode of the SWTS, so don’t forget to tune into the Star Wars Time Show on a weekly basis via our podcast platforms or via YouTube if you prefer the livestream angle. 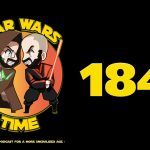