A new leak has hit Reddit, and it’s from MSW, but they don’t link to his content anymore for these reasons, so someone recapped the main points to post on the site.

In a nutshell, a few insights may have been gained about the rest of The Mandalorian Season 2 and for Season 3. In particular, two iconic ships may grace the series, and one of them may appear before this season ends. This ship is Boba Fett’s Slave I, and apparently the cockpit has been built, which means we could see it in play during one of these final three episodes. If the Fett spin-off is legit, it may be for that, but one would think it would appear on Mando too.

The other ship is a Naboo N-1 star fighter, and apparently that one is meant for Season 3. Although, no Naboo-like set construction has been seen or talked about, so who knows how this ship will play into the series next season if this is all true.

There have also been “Vespa-like” speeders spotted for Season 3, and they have been described as looking green and blue with chrome trim, and not “lived-in”.

You can check out the full summary below: 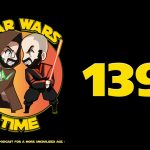 Anakin Skywalker Almost Made It Into The Last Jedi