Well, more leaks are currently taking place for Colin Trevorrow’s Star Wars: Duel of the Fates script treatment, and the new ones are of the concept art variety. They hit Reddit by way of imgur, so I went ahead and broke them down in the video below.

Who knows if they’re legit, but based on all of the other information, the Force is telling me that they are. I’ve also embedded the gallery of art after the break.

Hey now fans of beating dead horses, Matt Heywood here to breakdown yet another leak surrounding Colin Trevorrow’s Star Wars: Duel of the Fates script, and this time we have some concept art to consume.

Around 20 images have leaked onto Reddit via imgur, and while their authenticity can’t be verified, they surely do reflect some of the scenes we heard about from Trevorrow’s script.

There’s a chance even more will leak, but for now let’s tackle this first batch.

Up first we see an image of Rey, fully cosplaying as Jedi Knight Luke from ROTJ. She’s also holding the staff saber she crafted from her staff and Luke’s saber.

The callback to Luke’s garb may be a bit too much, but I do like the sleek look Rey has in it.

The next bit of art portrays the execution of Bisc Kova, which looks to be at the hands of Captain Phasma. He’s going to be executed by the light blade guillotine we heard about. This is on Coruscant, which I would’ve loved to have revisited.

Here we see Rey still training with Luke, apparently on a planet called Koralev. Leia wouldn’t have been training Rey in this version at all.

Up next is a landscape shot of Bonadan, which apparently is where Poe once lived. This is where he, Rey, Chewie and BB-8 go to and fight the Knights.

Speaking of the Knights, this shot portrays their Knife 9 ship and the Razer sail that Good Guys Team B was on, this is the scene where Rey kills them all.

This ugly looking mofo is Tor Vallum, the ancient Sith Lord who teaches Kylo how to drain the living force to cheat death.

This shot concepts out the battle between Vader and Kylo while he trains with Tor Vallum, which was meant to be a callback to Luke’s own vision battle with Vader from ESB.

This show gives us an idea of what Coruscant looked like under the First Order occupation. This one in particular looks a little suspect, because we were told that structures were built on top of Coruscant, but it is a concept after all, so who knows.

Here’s a cool shot of Finn, Rose, and the droids trying to active the Force beacon under the Jedi temple on Coruscant. Love that Rose is doing her mechanic thing while Finn assists.

Now this shot of Coruscant’s underbelly definitely matches what the leaked script described it to be, a desolate wasteland of sorts due to the oppression of the First Order.

This is another suspect looking shot, mostly because Finn looks to be Photoshopped into it from a TFA scene, but the background works for Coruscant’s underground as described in the leaks.

Here’s a pretty awesome shot of Rey facing a beast in the forests of Mortis, it looks a bit like a Rancor, but one that walks on all fours.

This concept art is supposedly of the Coruscant underground and its citizens repurposing Imperial era war machines to fight the Order.

Then in this shot we can see defected troopers and citizens rising up against the First Order on Coruscant. This would be the ground battle we heard about in the third act of this take on Episode IX.

And we get another shot of the ground battle on Coruscant between the Order and the underground army.

Alright, we’ve hit another suspect one, just because of how the art looks, but either way this shot portrays the moment we heard about where R2 gets blasted and 3PO has a major emotional reaction.

Now this one is wild as it features wildly looking different versions of both Rey and Kylo. This is apparently the battle between them on the top of the Mortis temple. You can also see Kylo’s new mask, which has hints of Revan’s mixed with a bit of the Death Trooper mask from Rogue one.

Here we get an awesome shot of a confrontation between Ghost Luke and Kylo, with Luke blocking his saber with his hand.

This one is another direct nod to the leaks, in particular the fact that Hux was a Force wannabe, and committed seppuku with one of his collected sabers.

And the final shot is a true gem, and it apparently is of Leia recording the hologram the Resistance sends out through the Force beacon. The air of nostalgia is really strong in this one.

So that’s it for this first round of Duel of the Fates concept art leaks. Again, who knows if they’re legit, but there’s a great chance that they are. No one involved, including Colin, has come out to forcibly deny any of these leaks, so that probably hints at most of this stuff being the real deal.

In the end, as we’ve said on the podcast, the Episode IX we got has its problems, but it’s a fun movie. The real shame is that the trilogy clearly never achieved what it could have been, so we will be left wondering what if until the end of time. If only power players would let creatives do their thing.

Are you listening Bob? 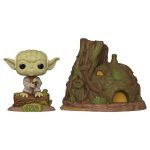 Yoda With Dagobah Hut Funko Pop Set Up for Pre-Order 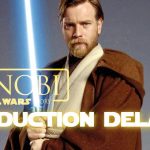