Hey now fans of the SWTS, no, we are not dead, rather we just took one week off to enjoy the holidays and get primed for another full year of the show, which will begin today with episode 143!

Even though we are fully into 2021, we still wanted to think back on 2020, at least in terms of Star Wars, because we all know the year sucked for most everything else. Naturally, we went with a listicle approach to recap our favorite Star Wars moments of the year. While I wouldn’t say the list order matters, I did try to put the more special moments towards the top.

Head on down below to check them out, or make sure to tune into the Livestream later today!

While it is mostly words and shit material, the High Republic era sounds enticing. It will set a new stage for Star Wars stories and feature different characters and locations than we’ve ever seen before. It’ll shine more light on what life was like when the Jedi were the true beacons of light in the galaxy, and that is an era that I think could be quite exciting.

I wasn’t a fan of Mayfeld from the first Season of Mando and I wasn’t too keen on the idea of him returning in Season 2, but after S2E7, he is now one of my favorite non-lead Star Wars characters. I credit this to Burr’s performance, which was one of the best of the season, and even though he hates the franchise and its fans, it sure has featured his acting abilities quite well.

While I would have preferred eight full episodes to break down this show’s epic second season, the hour long special we got was pretty damn great. The best parts had to be George and Rosario on set together laughing, Rodriguezz singing with Grogu, or any BTS footage featuring Temura Morrison as Boba Fett.

Roll your eyes if you must you old an angry Star Wars fans, but this LEGO animated tale is a gem, and well worth a watch with your younger Star Wars fans. It features the classic LEGO Star Wars shenanigans we all know and love, and it’s time jumping narrative allowed it to showcase all of the franchises’s favorite characters and motifs.

Hunter, Wrecker, Crosshairs, Tech, and now Echo made their Star Wars debut in 2020 as the Bad Batch, who are a group of modified clones that do their own thing due to their differences from other clones. They are a fun group to watch, and they helped save Echo, so with their own series coming up in 2021, they will surely leave more marks on the fandom moving forward.

I know many of you will never let go of the Baby Yoda name for our little dude, but I did love actually getting his real name this year, and more so for how it went down. Using Ahsoka to deliver the name was perfect, and just made the moment more special and impactful.

Katee Sackhoff’s debut in Mando was leaked months before it happened, but when she finally showed up as the live action Bo Katan in S2E3 of the show, it couldn’t have been a more memorable moment. From her save to her brow beating Din’s cult, she was perfect in real life form, and I can’t wait to see what’s next for her, the Owls, and of course Din.

The final four episodes of The Clone Wars could very well be some of the greatest and most emotional Star Wars stories to ever be told. In fact, this arc for me has made the Prequels redeemable, most notably, Revenge of the Sith, thanks to how it highlights the pain of the characters involved with Anakin’s choice and the fall of the Republic. Oh, don’t forget Maul’s contributions either.

7 The Year of Ahsoka Tano

Not only did Ahsoka get to star in the eight final episodes of The Clone Wars, but we also got to see her come to life thanks to Rosario Dawson’s portrayal of her in Mando. This character has gone from one shit head fans first hated to now being considered a legendary Star Wars hero. She showed us her resolve in The Clone Wars, and her mastery in Mando, so it was awesome for her to get so much action this year for fans of the Togruta.

For a character that was nothing more than a chump in the OT movies, he sure came back with a fury thanks to Mando and now his own series. I appreciate the world building going on with Mando, and while I’d love to get right back to Din’s journey, Boba’s threads this season definitely have me excited to watch his own show, so I love that they decided to give him a series. If anything, both Temura and Ming Na earned it, and I can’t wait to see what they get into.

Jon Favreau and Dave Filoni are Star Wars gods. I will not say they have saved Star Wars because it didn’t need saving, but they sure as hell made it super exciting again. Mando S2 was a gem full of surprises and twists, and learning that these two will be working on three other shows set during the same timeline just makes me smile for the possibilities. Between Jon and Dave they will be, or have contributed the following to the franchise: Clone Wars, Rebels, Resistance, Mando, Rangers, Ahsoka, and the Book of Boba Fett, so I’d say they’re doing alright.

He may have been a chump in his past life, but my God is Boba Fett back and batter than ever. S2E6 of Mando sealed his new legend, and Tem Morrison’s portrayal is majestic. I can’t wait to see where this character is taken in his own show now that he isn’t a bumbling fool.

I mean we got at least 10 new Disney+ shows and two movies revealed at this thing. Not to mention the fact that Hayden will be back as Anakin/Vader for Kenobi, which was also announced at this event. Hell, they even showed off a Bad Batch trailer, a Kenobi stinger, and a reel for the Andor series, so it was a full on Star Wars love fest for fans, and it has me excited for the years to come.

It took close to four years and plenty of prodding from our 10’s of fans, but Nick and I finally bit the bullet and started doing live streams of the show this year. It started when the US went into its only lockdown in April, and hasn’t stopped since. Live shows have made the experience more fun and fan focused, and I do think they helped us reach a few more people this year. Here’s to more growth in 2021!

How can Luke Skywalker showing up on Mando not be everyone’s top moment of the year? It can’t, that’s the answer, which is why his magic moment made the top of our list. It was pure Star Wars gold, and one of the best moments in franchise history. Cheers to the team for having the balls to pull it off!

Alright, so now that we’ve listed our top moments from 2020, here are a few of our Star Wars predictions for 2021.

Din Cameo in Book of Boba Fett and Pit Escape

While this series will be all about Fett, there’s no way we go two years before seeing our boy Din again, so he will have a cameo/role in the Book of Boba for at least an episode. We will also get to see how Fett survived the Pit.

World Between Worlds in Ahsoka

If Ahsoka does debut in 2021 we will see her use the World Between Worlds, and like I said on the show, I think she will use it to save Ezra before he gets sucked out into the Uknown Regions with Thrawn. I think this will also lead to us seeing a live action Thrawn, Ezra, and Sabine. Thrawn is guaranteed if anything else.

Bad Batch Links Up with Rex and Ahsoka

I believe at some point the Bad Batch will link up with Rex and Ahsoka as the Empire continues to rise and hunt down any of its traitors. I also believe we will see how Gregor and Wolfe made it out and with Rex when we see him again in Rebels.

This has been long rumored and the live action Ahsoka show may made it irrelevant, at least if they were going to use it to find Ezra, but there are other stories to be told, so I could still see a Rebels sequel becoming a thing and possibly focusing on Hera and her increased role with the Rebellion. She also has a son that could have Force potential, so there are plenty of paths this sequel could take.

Nick and I will talk more about our lists in this week’s episode of the SWTS, so don’t forget to tune into the Star Wars Time Show on a weekly basis via our podcast platforms or via YouTube if you prefer the livestream angle. 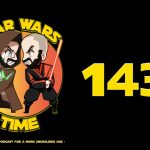