2018 started out rough thanks to the small base of “fans” who flipped their lids over the events of Star Wars: The Last Jedi, but by year’s end, the franchise seems to be coming into balance again. At least for people who aren’t hellbent on hate-loving the franchise moving forward.

There were plenty of iconic Star Wars moments to counter the toxic fandom, which also helped to flesh out additional lore nuggets, while also providing for a few awesome fan moments. We’ve whittled a list of stand out Star Wars moments from 2018 down to 15, which you can read more about below. Feel free to leave your own suggestions for other memorable Star Wars moments in the comments section below.

These moments aren’t ranked in any particular order and some feature SPOILERS if you haven’t been keeping tabs on the galaxy this past year.

The final film in the new Star Wars trilogy began principal photography this past August, which was great news for fans who like to speculate on what a new Star Wars movie’s plot will be about. This speculation usually stems from set pic leaks and video leaks, and while there have only been a few for Episode IX, it’s still be fun to talk about them with other fans. The fact that the film was being shot also meant it would only be a matter of time before we all find out how Rey, Finn, Poe, and Kylo’s journey ends, so it was great to get the tweet above from Abrams himself.

I think most fans expected Luke to be back in Episode IX, but they way his journey went down in The Last Jedi didn’t sit well with a few of them, including Mark Hamill himself. While Mark eventually came around, he sounded fed up with fan hate, and made it sound like he didn’t care or want to reprise his role of Luke moving forward, so it wasn’t clear if he’d be in Episode IX or not.

Billy Dee on the other hand hadn’t been involved in TFA or TLJ, but rumors started to swell around him being cast in Episode IX. They made sense too considering that Carrie Fisher passed away and wouldn’t be able to be used as originally planned, so the film would benefit from another classic character in its cast.

So of course when Lucasfilm put out the official casting announcement that included both of these Star Wars Mack Daddies, it made for a great Star Wars moment.

One of the more surprising Star Wars moments of 2018 was the reveal that the animated The Clone Wars series would be returning, and it would be an exclusive show for the Disney+ streaming service, which is set to launch in 2019. This is one of the most underrated Star Wars series of all-time, and easily features the best Prequel-era narratives this side of the Unknown Regions. Just check the trailer out one more time to see why it was such a standout moment.

If you weren’t a Star Wars Rebels fan then you missed a major moment in 2018 between two of the most recognizable Star Wars characters in the galaxy. Darth Maul, the once promising Sith Lord, managed to crawl out of Naboo with no legs, became a crime syndicate leader, and eventually hunted down his archenemies, Obi-Wan Kenobi. The only problem for Maul was that his fixation on his hate of Obi-Wan prevented him from being able to best the now older, wiser, and even deadlier Kenobi. Obi-Wan made quick work of Maul, but gave him a deserving and touching death. It was a great moment that successfully incorporated narratives from both the live action and animated Star Wars universes.

As I mentioned above, Darth Maul was brought back to life in the animated Star Wars universe, but thanks to the debut of Solo: A Star Wars Story, we also got to see him back in the live action Star Wars movie-verse. It was easily one of the biggest Star Wars shocks of the year, and I for one had no clue he’d be featured in Solo as a power player. It’s a shame the film bombed, because I fear we will never see another Solo again, and I’m sure that means no more Maul live action either.

Here’s to fans not hoping for Star Wars projects to fail again over being butt hurt!

7. The Kessel Run Gets Ran

Solo: A Star Wars Story is responsible for three items on this end of year countdown, and seeing Han pull off the Kessel Run in less than 12 parsecs was easily a highlight of the movie as well as a great payoff for hardcore fans of the franchise who have been wondering about Han’s boasts back in the Mos Eisley cantina in A New Hope.

The final moment from Solo: A Star Wars Story to make our list is the very first meeting of Han Solo and Chewie. While their meeting and subsequent friendship played out slightly different from how it was portrayed in the EU, their first introduction was still hilarious, and definitely one of the best parts of Solo. Seeing Han speak Wookie was absolutely gut busting, but watching the two form their bond throughout the film was special, and by the time it ended, it felt like Han and Chewie would be bros for life, and that’s all that really mattered.

Unlike a few angry Star Wars fans, I’m all for anything Star Wars, so I was jacked to learn that we’d be getting a new animated series in the form of Star Wars Resistance. This series aims to tell Star Wars stories set after Return of the Jedi, but before The Force Awakens, so it’s a great bridge series for the old and new trilogies. Plus, it has some very unique looking animations for a Star Wars project, and it has successfully introduced new characters while also fleshing out some existing ones like Poe Dameron and Captain Phasma.

In the past month, a brand new Star Wars Kid YouTube channel popped up and is currently delivering fantastic Star Wars content geared at kids, and even older humans who may not be well informed on all things Star Wars. The channel is the home of the Star Wars Galaxy of Adventures shorts, which use anime-style animations and authentic movie sounds to retell major movie moments in 2-minutes or less. The channel also hosts Fun Facts videos, which provide even more details about iconic Star Wars characters, locations, and vehicles. Even if you don’t have kids, this channel and its content is well worth subbing to moving forward.

The official reveal of Jon Favreau’s live-action The Mandalorian TV series was a surprise in 2018, mostly because we’ve been hearing about a live-action Star Wars series since 2006. The fact that we are finally getting one and that it is being helmed by Favreau with other Star Wars alums helping like David Filoni, is Force-like. We’ve already seen a few official set pics, and know at least one classic character will be in it in the form of IG-88, so there’s no doubt that this show’s debut in 2019 will make a list like this at the end of next year. I expect big things out of this project, and can’t wait to talk about it on the Star Wars Time Show.

While we’re on the topic of live-action Star Wars shows, the announcement that a Cassian Andor series will also be hitting Disney+ was an even bigger surprise than learning about The Mandalorian. Who doesn’t want to see Cassian back in action? He was an intriguing character in Rogue One, and his bond with K2 was a special one, so like other fans, I can’t wait to see the two meet for the first time, and the types of precarious adventures they’ll go on for the Rebel Alliance.

Now I don’t read books, but I talk to Star Wars fans that do, and apparently the second Thrawn novel from Zahn’s new trilogy featured some of the best Thrawn/Vader narratives around. There was a lot of deep shit covered as the story told of two different times in different eras when Anakin/Vader had to team up with Thrawn. Let’s just say that Thrawn knows a few things about Skywalkers.

Yeah, maybe it’s time to get on the audio book train Star Wars fans, because tales like these are too good to pass up, and they’re canon to boot.

This is a huge reveal for any year in a Star Wars fan’s life, but based on the Vader comic book run, which ended with the shocking #25, we now know who helped to bring Anakin to life. I wouldn’t say that I appreciated how this reveal was delivered, because to me it should have been in something a bit more mainstream like a TV series or movie, but alas Anakin’s true parentage came via comic books. Anyway, we now know that Sidious himself helped to create Anakin by using his Dark Side abilities on Shmi Skywalker. This in turn kills the idea of Anakin being the Chosen One, because he clearly isn’t now, but was made to appear as the One by Sidious to further dupe the dumbass, arrogant Jedi.

Huge moment none the less, just wish it was delivered in a different medium.

Ok, this one may be a stretch, because it’s mainly for Star Wars toy collectors and toy photographers, but Hasbro’s new Photo Real face tech for its 6″ action figures is the real deal, and has made the Black Series line almost as life-like looking as the much more expensive S.H. Figuarts brand. The tech first popped up in figures such as Grand Moff Tarkin in 2018, but has been rolled out to new waves moving forward, so all Black Series figures should now feature very lifelike looking faces for just $19.99 a pop.

You can see the realism for yourself below in one of my shots of Tarkin. Look at that mug!

That’s it for our list of memorable Star Wars moments in 2018! We will surely discuss the list on the next episode of Star Wars Time, so make sure you are subscribed so you don’t miss out!

Behind The Scenes Look at Star Wars: Galaxy’s Edge 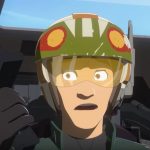