Tony Gilroy, the creator of Andor, sat down with THR to talk all things Andor through its latest episode, “One Way Out”.

In the wide ranging interview he touches on a variety of aspects of the show and what it has taken to get it to episode 10, so you should read the whole thing, but below you will find the more interesting quotes from it.

Tony was asked about Kino Loy’s fate after it was revealed that he couldn’t swim. He was asked specifically if he’s dead or has been executed, and this was his reply:

It’s hard to think Kino could survive the escape and ensuing prisoner roundup, but if you believe in the rules of TV and Film, then Tony has a valid point. No one saw him die, no one saw a body, so Kino Loy lives?

Tony on the Lack of Aliens

THR asked Tony about fans bitiching about the lack of aliens in the show, and this is what he had to say:

There’s already so much politics in the show to begin with, and we’re trying to tell an adventure story, really. So adding strong alien characters means that all of a sudden, there’s a whole bunch of new issues that we have to deal with that I don’t really understand that well or I just couldn’t think of a way to bake them into what we’re doing. You’ll see more as we go along, but it’s a legit question and one we’ll be answering as we go along. There is a more human-centric side of the story and the politics of it. There’s certainly no aliens working for the Empire, so that kind of tips it one way, automatically.

This has always been pretty self explanatory to most sensible fans, so hopefully this clears things up for those in the back.

When asked on his stance on not going super Star Wars zealot fanboy with Easter eggs and lore callbacks, Tony discussed how he was surprised by the eggs that made it in and if Lucasfilm was responsible for adding Star Wars jargon and references:

No, but we have Pablo Hidalgo. He’s sort of the curia of the Vatican up there at Lucasfilm. He’s the final voice, but we have a lot of people on the show. Mohen Leo, our visual effects supervisor who was on Rogue as well, is a huge part of our show and a really important feature on our show. Mohen and his team know everything. We have a lot of people around the show that are really deep. So if we have a question, we ask it, but it’s kind of an organic system, really. Every now and then, they sneak shit in there that even I didn’t know. I was reading online about the antiquities in Luthen’s gallery, and the provenance of some of those antiquities was news to me. (Laughs.) So it was fantastic that the art department snuck those things in there, but by and large, it’s a collaborative, organic, rolling process.

All hail the art department!

Tony on other Rogue One Spin-offs and Their Potential

Tony was asked what other characters would have made sense for a prequel:

I guess the Jyn Erso [Felicity Jones] show would be pretty fascinating, too. My attitude is you could do anybody. I mean, the Bodhi Rook [Riz Ahmed] domestic drama … Everything can be interesting if you get into it. If you dig down, it’s all interesting. Whose life isn’t, really? Cassian’s life is just a little bit juicier because he’s going to end up on that beach and he’s going to give it all away, consciously.

Gilroy talked about bringing Tom Bissell in for Season 2, and how he’s a super Star Wars nerd, but that is what Tony wanted for this season. As he explains:

Yeah, we did the same thing that we did last time. We just did a slightly longer version. I think we did seven days [in the writers’ room], and we brought in another writer as well. We brought in a guy named Tom Bissell, who’s a really strong writer and has a really interesting resume [The Mosquito Coast (2021), Author of The Disaster Artist]. He also has a very powerful interest in Star Wars, and he’s almost a nerd StarWars fan. And as you know, we’re coming into Rogue, so we’re covering four years [in season two]. And a lot of it is canonical, so it was really helpful to have a stronger canonical voice in the room as well.

Tony was asked about Syril possibly being in love with Dedra and if he’s a fasicst, and he had an interesting reply:

Well, I don’t know if he’s confessed love to her yet, or if he will, but he’s not a fascist. He’s unformed, really. He obviously likes rules. He likes order. We see the chaotically emotional landscape that he has been brought up in, and the simplicity of things being the way they are supposed to be and people doing their jobs is what keeps him sane. Fighting chaos is what keeps him sane, and that energy and that motivation is, ideologically, up for grabs. I don’t think Dedra’s ideology is up for grabs. I obviously don’t think the ISB’s is either, but there’s something unformed about Syril. It’s just as easy to see him going in a number of directions. So his issues are much more personal at this point; they’re more behavioral and psychological than they are ideological.

This reply caught me a bit off guard, and I dig that. It sounds like Syril may not just be a Dedra-stan after all, and that he could surprise fans in the end with where he ends up.

Tony Talks About What Cassian Was Building on Narkina 5

They’re building season two. (Laughs.) It’s the spine of season two. I’ve heard all kinds of things; it’s great. All of the material that the Empire has, I look at everything like, “Economically, how does this work? Who built Scarif? How do you build that? How do you build Eadu? How do you build The Death Star and this armada of ships?” There’s a lot of things that need to be built, and there’s an incredible amount of material. So, to me, what they’re building is not as important as the scale of it. When you go to the Imperial Bureau of Standards where Syril works, you go, “Oh my God,” and he’s just working at the Fuel Purity desk. But that’s what it takes to run this Empire. So the scale of it is really what we’re trying to suggest here.

Star Wars and economics, sounds like he’s channeling Lucas and the trade federation, but the answer makes sense. It would be nice to know exactly what they all were helping to build, but it may not really matter in the big picture.

Well, he’s a chess player, man. He’s sacrificing a castle to protect his queen. So I don’t think the Kreegyr story is over yet. Luthen is in a very tough spot, and his position over the next five years is only going to get more complicated, because how do you build this network? Earlier on, he says that he’s been building it for 10 or 12 years, but all of a sudden, with Aldhani, they’re going loud. All of a sudden, they’re going to expose themselves. And in a classic political sense, he’s an accelerationist. He believes in the fact that you have to make it hurt really bad in order to bring people to change.

Once you make that announcement [via the Aldhani heist in episode six], once you do that, you’re no longer in charge of the thing that you’ve put out there. So how do you juggle your paranoia? How do you maintain your secrecy? How do you go big and stay small and tight? How do you expand while expansion makes you more vulnerable? Those are going to be issues. You’re seeing the beginning of those issues in episode ten and in this tranche. That’s also one of the major food groups that we’ll be dealing with in the second season.

According to this statement, it’s quite clear that Luthen will make it to Season 2 of the show, but beyond that he has to go away. You can’t have the Grandfather of the Rebel Alliance not involved in Rogue One and beyond if he’s still alive during those time periods, so his chess game will catch up to him in Season 2.

Nick and I will talk more about Tony’s interview on next week’s episode of the SWTS, so don’t forget to tune into the Star Wars Time Show on a weekly basis via our podcast platforms or via YouTube if you prefer the livestream angle. 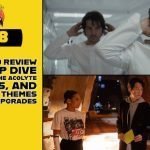