When you think about the upcoming Andor series and the characters you may see in it, K-2S0 may come to mind, but the former imperial droid won’t be featured quite yet. While this news has been known for sometime, Tony Gilroy, Andor’s show runner, explained why Cassian’s now iconic droid pal won’t be a part of the series quite yet.

Gilroy, while speaking at the Television Critics Association, revealed that one of the reasons K2 won’t be in show just yet is because Cassian isn’t “the person who would know how to — or be motivated to — reprogram an Imperial droid.”

Tony went on to explain that it’s a story they really want to tell, so fans should expect to see how K2 and Cassian became a thing at some point, but that point will probably be in season two.

“From a storytelling point of view, there are multiple reasons. I would say, ‘Wait and see.’ It’s a story we are eager to tell. It’s difficult to carry an Imperial droid around with you and not draw all kinds of attention. It’s a difficult piece of luggage. When we do it, we’ll do it in a spectacular fashion as opposed to presenting it and ignoring it, or presenting it or hiding it, or the bad versions we would have been forced to do.”

It does sound like Tony has a plan for K-2S0, but again I think that plan consists of him being featured in season two, in particular towards its middle episodes, because as Tony has said before, the final episode of Andor.

In addition to Gilroy’s statements on K-2S0, Diego Luna also revealed the runtime for the first three episodes, which will premiere on September 21st.

Well, the idea was to bring the most we could out at once, you know, and Disney Plus doesn’t do that often, you know?

So, we’re gonna deliver three episodes on the 21st…which is great, because it’s a standalone. It’s a series that is its own, you know? We need a good chance to introduce all the characters, the planets, the vibe, the tone of the show, and it’s going to be great.

The extended drop does sound like a great plan for a series like Andor, because it will allow the series to get its narrative fully developed before reverting to episodic releases.

Nick and I will talk more about Andor on this week’s episode of the SWTS, so don’t forget to tune into the Star Wars Time Show on a weekly basis via our podcast platforms or via YouTube if you prefer the livestream angle. 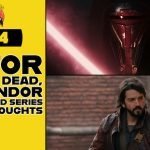