While talking with the Empire podcast, Tony Gilroy, aka the Emperor of the Andor series, revealed that the show will not immediately jump into a new three-episode arc in episode 7, which will be a change from the formula used for episodes 1-3, and then 4-6.

According to Gilroy, episode 7 will be “very interesting”, while episode 8-10 will tell another full story arc, and then episodes 11-12 will be a two-part finale.

This change in formula could hint that episode 7 may return to Cassian’s personal search for his sister to allow for some more flashbacks to be told, or it could completely shift the perspective back to Syril, who was absent from “The Eye” episode. Either way, it’s a bit of a surprise to learn that Tony’s 3-episode story arc formula isn’t in effect for the full season, and that there will be a standalone-esque episode before the next arc kicks off.

Nick and I will talk more about this reveal on this week’s episode of the SWTS, so don’t forget to tune into the Star Wars Time Show on a weekly basis via our podcast platforms or via YouTube if you prefer the livestream angle. 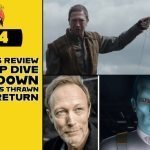