Lucasfilm has posted a Christmas Eve treat for Boba fans in the form of a new trailer for The Book of Boba Fett.

The trailer rehashes some previously seen footage, but it does loop in some new shots from flashbacks scenes, as well as a look at a new character. The female that pulls into view has to be Sophie Thatcher, who has been rumored to be in this series for quite some time now. She and Jordan Bolger have been attached to a Star Wars show for months, and after his appearance last week, it looks like this spot confirms Sophie.

It’s not clear if their characters will actually be named Drash and Skad, but these latest trailers at least confirm their participation in the show. It’s also now very clear that these actors have always been attached to Book, even though some thought they may show up in Mando S3.

In the stills below I think the most intriguing shot is of Sophie’s character, but not for her appearance. If you look around her it appears that something has torn up the city streets, and the fallout could be from Sophie’s gang, but the chaos strewn about could also be a result of the Rancor moment that has been rumored to take place in the show too. 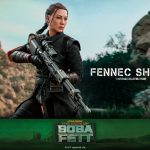 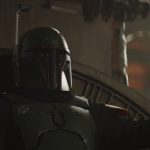