Over the weekend, it was revealed that the two parks would further honor their commitment to the Star Wars theme of these parks, by partnering with Coke to provide authentic, in world looking Coke products for guests to consume, and in my case, probably collect. There will be themed cans and bottles of Coca-Cola, Diet Coke, Sprite and DASANI. They will look all beat up, and will sport Aurabesh font, which is the font and text used in the Star Wars universe.

I’ll admit, they look pretty freaking radical, even if we’re just talking about Coke products. What this partnership bolsters though, is the fact that Galaxy’s Edge will be as close as Star Wars fans will ever get to being in the worlds that the films created, so outside of landing an acting gig in a Star Wars movies, going to Edge will be our only chance to live a little bit like someone from that far, far away galaxy.

You can check out a trailer for the themed cans of Coke products above. 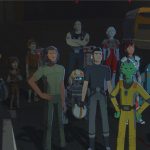