John Stratman, the Internet’s premiere pixel art video master, has released a trailer for a radical project he’s got in the works that pays homage to the 2016 Vader Down comic book series.

Stratman is literally remaking Vader Down using 16-bit video game visuals from the SNES Super Star Wars trilogy of games. Yeah, it’s as awesome as it sounds, especially if you’ve played the SNES Star Wars games, which are some of the best retro Star Wars side-scrolling experiences around.

The trailer above will give you an example of what Stratman is doing with his Vader Down retro-remake project, so make sure to check it out. If you’re not familiar with Vader Down, you should make yourself so, because it’s one of the better examples of what Vader can do when he’s motivated to knock some Rebel heads. The trailer will clue you in on his feats, but let’s just say he manages to take down an entire squadron of Rebel star fighters before crash landing on a planet’s surface, on which he then levels an entire battalion of Rebel troops.

Yeah, Vader is a pimp.

The first part of this remake should be live sometime next week before Celebration. Stay tuned for the full reveal! 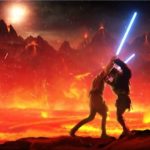