Lucasfilm laid down its roadmap for all planned books and comics that will be releasing this year in honor of the debut of Star Wars: The Rise of Skywalker, and those who like to read them some Star Wars, are in for a treat.

There will be 21 new books/comics to consume over the coming months, with pre-orders opening for most next week. The books range from Adult and Young Adult novels, to kids books and pop-ups, as well as new comic runs for both kids and older Star Wars fans. Of course, there will also be a litany of books to cover the production of the film in addition to the fiction novels.

Each of the novels will tell brand new stories set after The Last Jedi, and they will provide Easter eggs and possible clues for what may go down in The Rise of Skywalker, but they’re mostly meant to flesh out the state of the galaxy post TLJ. This means you’ll get more than a few adventures with the new cast in book form, as well as some new characters created just for these novels.

You can check out a few of the new Star Wars books coming out in honor of TROS below. The full list can be found over on StarWars.com.

Publisher: Del Rey
Author: Rebecca Roanhorse
Format: Adult novel
Description: In this Journey to Star Wars: The Rise of Skywalker novel, Poe Dameron, General Leia Organa, Rey, and Finn must struggle to rebuild the Resistance after their defeat at the hands of the First Order in Star Wars: The Last Jedi.
On-sale: 11/12/2019

Publisher: Insight Editions
Author and Pop-up Engineer: Matthew Reinhart
Illustrator: Kevin M. Wilson
Format: Deluxe Pop-Up book
Description: Presented in a dynamic 360-degree format that enables the action to be viewed from all sides, the book also opens up to form a displayable 3D diorama of the entire saga. Packed with amazing Star Wars moments and hidden surprises to discover, Star Wars: The Ultimate Pop-Up Galaxy represents a whole new level of sophistication and interactivity in pop-up books and is guaranteed to thrill fans of all ages. Matthew is the King of Paper Engineering and returns to the franchise with this new, deluxe pop-up.
On-sale: 10/8/2019

Publisher: Marvel Comics
Author: Ethan Sacks
Artist: Luke Ross
Format: Comic mini-series
Description: On the run since the destruction of the Starkiller Base, General Leia and the remaining handful of Resistance have barely managed to survive, much less strike back against the superior forces of the First Order. Running low on options, Leia decides to reach out to her former allies, the Mon Calamari, whose shipyards once powered the Rebel Alliance.
On-sale: #1: 10/9/2019; #2: 10/16/2019; #3: 10/23/2019; #4: 10/30/2019

Publisher: Disney Lucasfilm Press
Author: Kevin Shinick
Format: Young Adult novel
Description: In this Journey to Star Wars: The Rise of Skywalker young adult novel set just before The Force Awakens, a restless teenager sets out to discover what connection his mysterious Force powers have to the fabled Jedi and what the Force has in store for him.
On-sale: 11/19/2019

Publisher: Disney Lucasfilm Press
Author: Caitlin Kennedy
Illustrator: Eda Kaban
Format: Hardcover picture book
Description: Have you ever stopped to think about how there is nobody else in the galaxy who is exactly like you? This empowering picture book celebrates young heroes-in-the-making and features illustrations that follow Rey on her own hero’s journey.
On-sale: 12/17/2019

Publisher: DK
Author: Pablo Hidalgo
Format: Reference
Description:Star Wars: The Rise of Skywalker: The Visual Dictionary is a 200-page definitive guide to Star Wars: The Rise of Skywalker, revealing the characters, creatures, droids, locations, and technology from the new film. Packed with 500+ images and information, plus cross-sections of new vehicles, as penned by Star Wars scribe Pablo Hidalgo, it’s a must-have for all fans who want to go beyond the movie experience.
On-sale: 12/20/2019

Publisher: Abrams
Author: Phil Szostak
Art: Lucasfilm Art Department
Format: Art of
Description: The official behind-the-scenes concept, production, and post-production art for Star Wars: The Rise of Skywalker. Go inside the creative process behind the most anticipated film of the century. The latest trilogy in the Star Wars film series brings the Skywalker Saga to a close and The Art of The Rise of Skywalker will take readers into the creative process behind visualizing the epic worlds, creatures, characters, costumes, weapons and vehicles of the landmark conclusion more than 40 years in the making.
On-sale: 12/20/2019

Publisher: Disney Lucasfilm Press
Author: Justina Ireland
Illustrator: Phil Noto
Format: Middle Grade novel
Description: When a distress plea goes up from the isolated planet Minfar, Resistance heroes Rey, Poe, and Rose hear the call! Together they will face down a First Order battalion, terrifying flying creatures, and a weapon that could change the course of the war!
On-sale: 10/4/2019 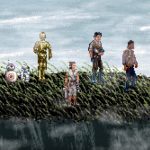