Just this week, multiple rumors were reported on various Star Wars related shows that are supposedly headed to Disney’s streaming service, Disney+. On Monday, we covered the rumor that the likes of Qi’ra, Lando, Poe, and Finn would be getting series on the service, and now just yesterday, HN Entertainment dropped additional rumor bombs for shows headed to the service.

They’re reporting that there will be a young Princess Leia series, a Rose Tico series, a Captain Phasma series, a Knights of Ren series, and most interesting of all, a Darth Bane series. Based on these rumors, I felt the need to do a video rant on the state of said rumors, and how Disney may essentially be shifting its once planned standalone Star Wars projects, into streaming series for its Disney+ service. You can check that out above.

Basically, after Solo’s failure at the box office, Bob Iger admitted that they were going to rethink their Star Wars projects strategy, and we do know that at least one movie that was going to be set on Tatooine, had been scrapped post Solo, so there were going to be other standalone “Star Wars Stories” if you will. The Solo failure clearly scared the money holders, so it appears to me at least, that the new plan is to possibly shift any movie projects that aren’t tied to Rian Johnson and the GoT Bros, over to a streaming series.

Will any of these rumors turn out to be true? More than likely yes, because if Disney started offering Star Wars series in addition to The Mandaloriaon and the Cassian series, Star Wars fans would gladly flock to the service and pay a month fee until they die. All we can do is wait for now, but I won’t be surprised if at least one of these rumored shows sees the light of day. 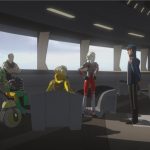 Star Wars In Numbers Breaks Down the Saga