Today at the Playstation 5 showcase event a major bit of awesome was announced for fans of the Star Wars, and that’s the fact that a full-on remake of Star Wars: Knights of the Old Republic is headed to the PS5 as a timed console exclusive.

A trailer was released to add to the hype, and it does it’s job without really showing us a damn thing but a souped up looking version of Darth Revan, who looks even better with modern game engine technology. The game is being handled by Aspyr Media in collaboration with Lucasfilm Games.

Stay tuned for additional details on the Star Wars: Knights of the Old Republic Remake for PS5.

The game developers talked with StarWars.com and offered up a few more details, which are summarized below.

The first being that the game will also release for PC at launch, so it’s just a timed console exclusive for PS5. The window for release on the Xbox Series X has yet to be revealed, but gamers should expect at least a 6 month wait based on past timed exclusive launches.

Dan Brooks, the author of the article, also had this to say about his talks with the developers:

And for those who have loved KOTOR through the years, it’s a chance to experience something cherished in a new way. From the sound of it, KOTOR – Remake is no nostalgia trip; rather, it’s a love letter to what is widely considered a Star Wars masterpiece.

Dan also clarified that when he wrote “Legends” while describing KOTOR, he was referring to the old KOTOR and not this remake, so I guess we could take that as an opening for the remake being canonized.

If you are confused on the differences between a Remake, a Remaster, and a Reboot, we will examine what all three entail on next week’s episode of the Star Wars Time Show.

Nick and I will talk more about this game reveal on next week’s episode of the SWTS, so don’t forget to tune into the Star Wars Time Show on a weekly basis via our podcast platforms or via YouTube if you prefer the livestream angle.

Knights of the Old Republic
0 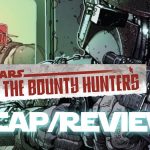