Giancarlo Esposito is making waves thanks to a recent interview with Rich Eisen in which he teases a potential release window for The Mandalorian Season 3.

During the interview, which occurred on The Rich Eisen Show, the host asked Giancarlo when he and his kids could expect to see the third season of the show, and this is how he responded:

“You’ll get it soon. I’ve got a little few things to do in regard to that, to put some finishing touches on what I do. I believe it’ll be sometime this Summer, no date set yet, but coming soon.”

There are a couple of things to unpack from his response. First, it sounds like Giancarlo is scheduled to do some reshoots, or possibly film his scenes for the first time. Production on the series wrapped a week or two ago, so it sounds like he’s either the last to shoot, or they’re doing a reshoot of some kind.

Of course the other item of note in his response is the notion that the series may release soon, as in this summer. That nugget just doesn’t seem feasible considering that principal photography just wrapped a few weeks ago. There just doesn’t seem like there would be enough time to finish post production on the series unless most of it was shot previously and no one knew about it. Maybe some parts of the season were shot while the Book of Boba Mando moments were being filmed?

Andor has been tagged for a mid to late summer release, which would contradict Esposito’s belief that The Mandalorian would be a summer drop as well. There is no way Disney would run two of its live-action Star Wars series at the same time, so again, Giancarlo was probably just spit-balling.

If anything, more information on the season and its possible release date could be discussed at the Celebration 2022 live-action panel, or the Mando+ panel, so hopefully more clarity will be provided towards the end of May.

Nick and I will talk more about Giancarlo’s interview on this week’s episode of the SWTS, so don’t forget to tune into the Star Wars Time Show on a weekly basis via our podcast platforms or via YouTube if you prefer the livestream angle. 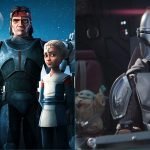