Thanks to a few recent Topps digital card leaks, we have a new major bad guy character to contend with in The Mandalorian.

I say this due to the chest straps you can barely see, and for the fact that the helmet doesn’t look like it’s made out of the usual Trooper plastic material. I also think it’s Gideon thanks to some information Giancarlo leaked over the summer in which he said that Gideon basically has a new toy to get around in, so a tank would check that box nicely.

Another card with a character sporting this helmet with cobbled together Imperial armor also leaked out, and I believe it to be the full version of the character shown above. I really do think this is Gideon, and if it isn’t, then I’m saying these troopers are his personal guard.

Make sure to tune into the next episode of the Star Wars Time Show in which myself and my co-host Nick will fully breakdown this new Mando leak! 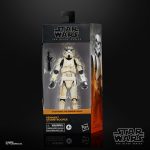