EW has released an interview with The Mandalorian cast that was recorded after D23, and in it, the cast and crew discuss some of the themes fans can expect in the third season of the inaugural Mando-verse series.

First up, Director Rick Famuyiwa discussed how Season 3 will greatly expand upon the wolf and cub trope from the first two seasons:

“The exciting part about Mandalorian is that it started with this very simple and sort of elemental relationship when the Mandalorian met this young child and how it’s affected him. And I think all the decisions he’s made since coming in contact with The Child has sort of raised the stakes in terms of the storytelling of the show, and we’ve just been following that to sort of its natural place as he’s experienced meeting people outside of his own creed and understanding what it means to be a Mandalorian. So as we get to season 3, it’s really a sort of culmination of that. We’ve started with our original Mandalorian but as the teaser said, he’s not the only one. And what does that mean? So this season is really about kind of bringing all that together.”

Katee Sackhoff also shared some insights into the mind of Bo Katan:

“Coming into this season, Bo has some clear ideas about who she believes to be a real Mandalorian, and I think that is a really important place for her to start. She was raised one way, she thinks one very clear way, and her knowledge of that is being challenged. One of the things about Bo that I love and we see a lot of this season is that she’s always growing and she’s always evolving. And I think that’s a really beautiful lesson.”

Emily Swallow, who plays The Armorer, teased that her character may have a meatier role in Season 3:

“One of the things that I really appreciate about the Armorer is that she never shies away from a challenge. She’s most of the time enjoyed someone else have to deal with the challenges, but I don’t think she shies away from them for herself, and I think she… I think we all enjoy watching other people work through challenges because we get to see them learn and that sort of encourages us to learn because… So we’ll get to see these characters learn.”

Giancarlo Esposito then dove into what the show’s themes mean to him:

“Moff Gideon would really like to be a Mandalorian, and there’s a reason for it. That’s his psychological, real problem. He really wants to be a Mandalorian because the strength and power of the Mandalorians is not necessarily that they are individuals. It’s that they are part of a group that have an ideal and a morality. And that to me is really powerful in our story. This journey this guy takes [points to Pedro Pascal] in such a beautiful way is the struggle, and we hear it in his voice and we see it in his body. There’s something about duty and being in service and action that galvanizes him to have to do it. And within that, like ‘Oh I’m done now, I’m done. But no, because wait a minute, I still have to learn something about who? Me!’ And it’s phenomenal. And how do you resist that unjaded personality that allows you to see where you came from? How can you resist that? You hate that little child for a minute, you hate that, because it’s showing you what you were. And then you became this f*ng warrior. So all of these elements of the story really intrigue me and allow me to be really thankful and grateful to be in this universe.”

According to SWNN, Moff Gideon will be getting an armor upgrade in Season 3, and it will be very Mandalorian-esque. The report doesn’t mention how and when he secures this kit, or if it came from an official source, so consider it a rumor at best for now.

We’ve learned that in season three Moff Gideon will have new armor and a new helmet. The helmet will be black with red eyes and horns on it. The horns will be six, similar to what Darth Maul had. It will resemble a Mandalorian helmet, but it won’t be exactly the same as the other Mando helmets we’ve seen. It will look closer to Boba Fett’s helmet but it will be black, shiny, and very sleek. It will also be a bit bigger than the rest. Gideon is getting a full upgrade as he will also have a black and red jetpack.

If reports are true, fans will be able to see what Season 3 is all about for themselves, and if Gideon gets some new armor on February 22, 2023. 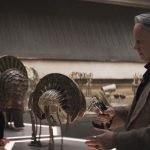