We finally got a look at The Mandalorian Season 2 thanks to a trailer drop this morning, so naturally I had to break it down scene by scene to throw some Star Wars plot speculation poo at my wall.

Head on down below to check it out. You can also check out 40 stills from the trailer to see the more key moments from it.

This is the mother F’ing way no? We finally got a trailer for Mando S2, and it was perfect. It wasn’t too long, it didn’t expose much detail about any single scene, and it featured enough tantalizing shots to give Star Wars fans chills throughout. Oh, and it had a killer score.

As I like to do I want to break down the key moments from this trailer by speculating what may be going on in them, or explaining what actually we are looking at, so let’s get to it.

Alright, up first we clearly have a busted up razor crest sputtering through space looking for somewhere safe to land after what was probably a dogfight, potentially with two New Republic X-Wings, but more on that later.

The trailer then kicks into Ludwig’s killer new score with some bitching chanting as we get the Armorer’s speech from last season playing over Din and the Child arriving in some sort of city. We then get a shot of a Tusken on a Bantha as the Crest flies overhead, so Din and the Child are clearly on the mission he was tasked with to find the Child’s space wizard kind. This is probably a return to Tatooine for them too.

We then see the Crest flying towards and icy looking planet and then the Child and Din are seen standing in a snowy area, which is probably the same planet. I’m really thinking this is Ilum, a Force-filled planet if you will thanks to it’s kyber resources and other canon tales of how Jedi used to go there to form their sabers.

The trailer then cuts to another town, this one a harbor of sorts, so they’re looking for some sort of passage via a boat, which is a bit unique for Star Wars because, starships and all you know.

The first big reveal of the trailer happens next when we see Sasha Banks’ still unnamed character, which not only confirms the Banks rumor, but also sheds light on her character, which really seems to be someone attuned to the Force. Her outfit, and the way the narration funnels into talk about Jedi may be to throw us off, but I don’t think she’s Sabine Wren, rather a new character, one who may be training with Ahsoka or another Jedi.

From here the spot shifts to a shot of the two heroes on a barge, which again is something kind of new for Star Wars, not like boats are needed much with starships.

We then see what I believe is the fight that led to the Crest being busted up in the first shot of this trailer, because it seems that Din gets confronted by New Republic X-Wings, and one of them has a familiar looking astromech in it. I can’t tell if it’s R2’s iconic blue coloring, but it sure does look like our little buddy, but I’m guessing it’s just a lighting thing, and the droid is just a common astromech.

But as we can see, they definitely go after the Crest and probably are why it’s all beat up looking at the beginning of this trailer.

As the montage continues we see Din on a speeder, probably back on Tatooine, and then we get a shot of his Season 1 pals Cara and Greef. I’m guessing they’re walking towards Din as they look happy to see whoever they’re greeting.

The Remnant gets its turn in the spotlight next with a shot of TIEs taking off, which transitions into the interior of what appears to be some sort of mountain side base, or a low flying ship, because we ultimately see scout troopers jumping their bikes off a ledge to give chase to something.

Mando is seen struggling, probably on the barge, before we get to see him light up his jetpack during a chase scene.

Another shot of the first city he showed up in is teased before two more quick shots of what I believe to be an cave on Ilum.

We then see Mando arrive at some sort of Gamorrean fight club. Here he’s talking to some soft of cyclops character before some henchmen pull some guns on him. This results in a very cheeky moment in which the Child buttons up his carrier the moment he sees his big buddy bust out the Whistling Birds.

The trailer goes dark as we hear Din kicking ass, and then it closes out with him finishing off an alien with the Mando’s creed – This is the way.

Damn good stuff, make sure to tune into this week’s livestream and podcast to hear our full take on what this trailer offered up. 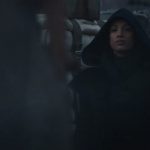 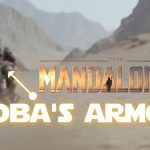