Lucasfilm has released all of the concept art for the latest episode of The Mandalorian, which was Season 2 Episode 7, aka, Chapter 15, aka, “The Believer”. You can also check out some official stills by heading over to StarWars.com.

As far as the concept art goes for this episode it does look like most of these creative visions made it into the show, but as always, there are some differences.

For example, it appears at one point in time that Mayfeld would be saving Mando during their Juggernaut ride, but as we now know, this never played out on screen. It also looks like at one time that the base on Morak was going to have a Rogue One style transport shipped parked on its landing pad. Not to mention that fact that Cara and Fennec were at one point depicted wreaking havoc inside the mining facility.

Now in terms of some art that made it fully into the show, I have to go with the scrapyard shot, which looks as if the production department honored in full with practical set pieces and the LED backgrounds. It’s amazing to see how concepts like these become a reality, and the scrapyard shot is definitely this week’s gem in terms of how it translated to screen.

Nick and I will talk more about The Believer in this week’s episode of the SWTS, so don’t forget to tune into the Star Wars Time Show on a weekly basis via our podcast platforms or via YouTube if you prefer the livestream angle. 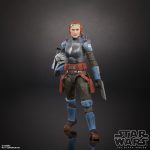