When you see the title for this week’s episode of The Mandalorian it’s hard to not feel a little nervous, but tragedies aside, Season 2, Episode 6 was yet another fantastic foray into the excellent world building that Jon and Dave have rolling in this Disney Plus gem.

Head on down below for my full breakdown of The Mandalorian: The Tragedy!

Hey now fans of having their stomach’s punched, it’s time to breakdown all of the easter eggs, star wars references, cameos, and best moments from The Mandalorian: The Tragedy, aka, S2E6, aka, the one where Boba proves that he’s not a bozo after all.

Alright up first, and surprisingly to me, we got right to Tython and the seeing stone mentioned in last week’s episode by Ahsoka, so much for this being a season finale location.

And up next we get right into the Boba-fication of this episode when we see the good old Slave 1 flying across the sky. Guess Jabba honored his lifetime free parking after Fett delivered him Solo.

You gotta love Boba dropping his Dad’s infamous I’m a simple man line, which he heard him speak to Obi Wan back in AOTC.

It turns out that Boba is one helluva surgeon because he saved Fennec Shand, the assassin from season 1 played by Ming Na-Wen, and who now has a robo-gut.

While the three talk, we got a Jango reference, and more importantly, clear confirmation that Boba Fett himself is not a Mandalorian. As he says he pledges his allegiance to no one, so he was never down with the creed, and therefore never a Mando in any aspect of the word, Watch cult member or otherwise. So quit saying he was the first Mando of Star Wars punks!

I believe this is the first time we’ve seen a Yellow painted trooper and a mortar trooper at that, fire in the hole!

The EWEB is back and still unable to hit a single target!

Alright, we already knew Boba was back this season, in this episode for sure for those of you who can’t accept the obvious, but I have to highlight his donning of his armor for the first time again. Pretty dope, even if he has a bit of a belly these days.

We learned of the Dark Troopers two weeks ago, but now we finally got to see them in action, and it was glorious outside of the fact that they kidnapped grogu like a bunch of dicks.

Boba gives us a spice mention when he tells Fennec that he’s not having a spice dream when he tells them the Empire is back with a Cruiser.

The talk between Boba, Din, and Fennec after Grogu is captured had some great canon confirmations by finally cementing the fact that Jango was a foundling, not a true Mando, and that he fought in the Mando Civil Wars.

I believe up until this point Jango’s true heritage and connection to his Mando armor was legends material at best, so it’s nice to finally put all of this to bed by confirming that Jango was more or less like Din and did get armor granted to him by actual mandos, but Boba himself never took up any creed and only inherited the armor by right since the chain code belonged to him and his father before him.

Ok, so the prisoner scan had all sorts of familiar faces like the asses who tried to steal the kid in episode 2, looks like some Aqualishes, other maybe familiar looking aliens, and of course the real egg, Mayfeld. Looks like Bill was BSing us all when he said he wasn’t involved with the show this season.

And finally, we got to see that glorious looking Darksaber again. Boy is that thing smooth AF looking and sounding I might add.

And now for the best moments in The Tragedy.

You know I’m good for at least 1 or 50 nods to the Din and Grogu bond, so I have to mention the opening scene in which Din is chuckling using Grogu’s name and playing Force catch with him.

Oh, and it’s topped off with the two of them zipping through the air like Iron Man complete with a whoooopeeee from the Grog-ster.

While it may be one of the wonkiest looking and designed ships in Star Wars, how could any long time fan not be moved by seeing the Slave 1 zipping across Tython’s sky.

I’ve taken some heat from the SWTS fanbase on my Boba Fett was a Bozo in the original trilogy stance, but I’m not so much of a hater to admit that his Gaffe Stick battle was pretty freaking badass.

Dude’s street cred really increased for me in this episode thanks to scenes like this and a few others.

Boba, you’re no longer a bozo to me.

In fact, my next highlight moment is seeing Boba in his family’s armor again. While it isn’t his jumpsuit look, I think the whole nomad robes and Beskar look worked for him and his new spotchka belly.

Obviously, his badassness went up even further with his armored up fight and subsequent double ship rocket maneuver.

He’s a far cry from the bumbling idiot who got jetpack misfired into the sarlacc pit in ROTJ.

While watching the Crest get vaporized may not be an actual awesome to see, the fact that it happened is a pretty big deal for the show, so I had to include it as a key moment. RIP you old bird, I loved you like the Falcon.

Yeah those Dark Troopers in action looked dope, and we at least know for sure that they’re bots and not any sort of pimped out organic beings now. They’re still dicks though for taking the Grogu.

I really appreciated the scene in which Mando is going through the Debris and he finds the shifter knob and the beskar spear.

It’s a poignant moment that is undoubtedly foreshadowing things to come, so pay close attention to how the ball and spear come into play over these next two episodes, if not the finale. I think they both will be key to how things play out moving forward thanks to this scene showcasing their importance to Mando and the story in general.

I also was a fan of the Boba and Fennec pledge. It shows that Boba isn’t such of a dick after all, and quite frankly, I think he’s turned the page on his nefarious bounty hunter days. He even mentioned earlier about being a saved wretch in the tatooine desert like he did for Fennec, so I think his time as a nomad did him well.

Besides, after this episode, who wouldn’t want more of these three together, not to mention the inevitable other cast of big names that may join them like Bo, Ahsoka, Mayfeld, and whoever heard Grogu’s call through the force.

I also appreciated getting more clarification on Jango’s history and how he was indeed a foundling and fought in the Mando Civil wars, so now he has a legit canon backstory that clears a few things up for fans of the character and his cloned son.

Ok, so Grogu getting captured sucks, but we all knew it was coming, so while that wasn’t a top moment due to the ball punch factor, seeing him work over some bucket  heads with the force like a little Vader was pretty excellent.

You also had to appreciate Gideon’s little talk and Darksaber show and tell with him. That dude is a bad man indeed.

Alright Mando fans, I’m thinking we are headed towards a Star Wars style Avengers team up, so by the end of this season I wouldn’t be surprised if we saw Bo and the Owls again, Ahsoka again, but maybe not because I think the next force user we will see will be the one called by Grogu, so possibly Ezra, or for you dreamers, Mace Windu or the Skywalker himself, but I’m highly doubting those final two.

Either way I expect this season to end with this team up showdown, and ultimately the force user coming in “On your left” style to save the day, or sadly, a bit too late, giving us an Empire Strikes Back kind of cliffhanger going into Season 3.

Make sure to tune into the next episode of the Star Wars Time Show in which myself and my co-host Nick will fully breakdown The Tragedy and give our thoughts on it as a whole. 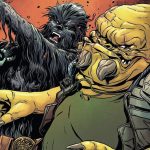 Rumor: A Star Wars Comic Exclusive Character May be Coming to The Mandalorian Season 3