Holy moly Star Wars fans did The Mandalorian just do all that in S2E3? Hell yes it did, so head on down below to check out our breakdown of “The Heiress”, one of the most lore-rich episodes to-date!

Hey now fans of Mandalorian cult members, how was that for an episode of The Mandalorian you filler episode complaining punks?

S2E3 of The Mandalorian, titled, The Heiress, was loaded with excellence, so let’s get right to the Easter egg, references, and best moments breakdown.

We start things off with a familiar sounding alert as the Crest approaches Trask, and the sound is just like the alert we hear when the Falcon is about to roll up on the exploded Alderan in A New Hope.

On Trask, we get to see a familiar alien species in the form of a Mon Calamarian dock worker.

You’ll also notice that they use modified At-Ats as cranes to haul crap out of the ocean like Mando’s busted ass ship.

Thanks to being on a water planet, we also get to see a Quarren alien, a species that shares a home world with Mon Calamarians.

At the dock we get to see Mercedes Varnado’s character again, and for those keeping score that is Sasha Banks’ real name.

This one may be a stretch, but I couldn’t help but be reminded of the food hoses on the Nebucanezar from The Matrix when Din orders up the kid some chowder.

While I’m stretching things, I also found the kid’s lunch to resemble a face hugger from the Alien franchise, at least its action in wanting to hug the kid’s face.

Alright, so for the big bang moment of the episode we finally get to meet the live action Bo Katan, played by Katee Sackhoff, who also voiced the character in The Clone Wars and Rebels. She’s joined by new characters Koska Reeves, aka Sasha, and Axe Woves, who is played by Simon Kassianidas.

In another revealing moment, we learn that Din is a Child of the Watch, which is a Mandalorian cult that stemmed from Death Watch, another cult that helped to tear Mandalore apart thanks to Pre Vizla and Darth Maul, and quite frankly, Bo herself. Watch The Clone Wars people, the shit is too important now with how Dave and Jon are folding these mains into Mando. Oh, she also mentions the Purge, something we’ve heard about a few times in this show.

Bo and her owls along with Mando set out to take a Gozanti-class freighter, which is a ship that first appeared in The Phantom Menace, and it also showed up in a few episode of The Clone Wars.

You always have to appreciate a joke about how bad Stormtroopers are at aiming, so cheers to Axe Woves for his couldn’t hit a bantha line.

When the Mandos attack we get to hear another familiar alarm, and it’s the iconic sounding Imperial we are getting attacked by a small rebel force alarm.

The Man in Black himself, aka Titus Welliver showed up as an Imperial officer trying to fend off the Mando attack.

Amongst all the familiar Imperial weaponry we can see the good old E22 blaster rifle, which we first saw in Rogue One with the Shoretroopers.

Bo Katan mentions a new planet called Corvus, and while the planet seems new, the name Corvus is the same name of Iden Versio’s ship from Battlefront II.

And we ended with a doozy when Bo finally name dropped Ahsoka Tano, the live action reveal we’ve all been waiting for, but will we have to wait one more episode to do so. The suspense is killing me!

And now for the episodes best moments and a few key insights!

I’m a sucker for silly gags, so I did appreciate the whole Razor Crest landing fail and subsequent dunk into the ocean. It seems the Crest being a hunk a junk is going to be a running gag this season, and I’m just fine with that. Kinda like the Falcon in that regard.

I’m also a sucker for love, so how could I not appreciate the Frog people reunion.

Alright, now for a banger of a moment, and that is the arrival of live action Bo Katan, and the newly revealed Koska Reeves and Axe Woves. We’ve known about the Katee as real Bo rumors, and considering her past with the character, it was just a great fan moment to see her come to life in a flesh and blood format finally. You non animated series believers are definitely missing out on some killer payoffs if you skipped Clone Wars and Rebels.

We might as well stay on the ship scenes, because we get another awesome moment that helps to explain Mandalorian lore a bit more and that is the fact that Din is a Child of the Watch, which is a freaking Mandalorian cult stemming from Death Watch. So only these Kool-Aid drinkers spout the way and have the helmet rule, and based on Axe’s comments, it sounds like actual Mandalorians think they’re nutty and a reason why the planet can’t be reunited. Which all makes sense if you know what Death Watch did and helped to do on Mandalore during the Clone Wars. Again, watch the cartoons if you were ignorant towards them previously.

At this point, I’m not sure there’s anything cooler in Star Wars than watching live action Mandalorians do their thing, so the whole beginning of the ship raid was pretty bitching if you catch my drift.

One has to appreciate Bo trolling Din with his favorite This is the way line when she changes the deal on him to steal the Imperial ship. This exchange again shows how odd normal Mandos think the Child of the Watch are.

We finally got us some Gideon this week, and you had to appreciate his take on the situation and his Long live the empire directive. This dude is a boss, and people fear him as much as Vader apparently.

Even though Din may have been raised in a cult, he’s still a freaking warrior pimp, so I had to mention his heroic move to eat a bunch of blaster fire to break through a Trooper firing squad. I didn’t see those normal Mandos trying to be heroes, so keep on drinking that This is the Way Kool Aid Din!

Bo gave us two additional lore rich exchanges while on the bridge of the freighter. The first being her talk about Gideon and thinking he has her dark saber, which again is very important because she needs it to rule Mandalore again, and she was the last one to have it when we last saw her in Rebels, so the whole dark saber plot is thickening and we all should love it. Oh, she also spoke the name of a Star Wars legend at this point when she graced our ears with the name of Ahsoka Tano, so like we’ve been telling you on the show, her inclusion in this series is a forgone conclusion.

This next moment may not be impactful to the overall story, but you gotta love that the kid came full circle with his frog murder habit and now wants one for a pet!

And finally, we end with another the Razor Crest is a busted ass ship gag when it loses some of its patchwork while making the jump to hyperspace.

Kudos to Bryce Dallas Howard for a great episode!

Make sure to tune into the next episode of the Star Wars Time Show in which myself and my co-host Nick will fully breakdown The Heiress and give our thoughts on it as a whole. 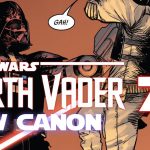 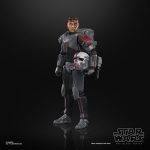