After watching “The Reckoning”, anyone that has a problem with Deborah Chow running Kenobi can give me a call so I can tell them they’re morons to their troll faces, because this lady knows how to tell a Star Wars story. There’s no “filler” in this one haters, as this penultimate episode revisits the past to bring Season 1’s main plot arc back into crystal clear focus.

Hey now fans of the green Baby guy, Matt Heywood here from the Star Wars Time Show to recap and review The Mandalorian: The Reckoning, aka, S1E7, Chow’s second.

The episode begins with Mando getting a call from Greef, who offers him a deal to bring the kid back as bait to kill off the client and his remnant forces once and for all. The Mando is suspect, but knows he has to try the plan out if he ever wants the imps off his tail.

Before he does so though he makes a stop on Sorgan to hit up Cara Dune, who these days is making cash as a pit fighter of sorts. She initially refuses his offer until she learns that the client is an Imperial, which changes her mind because she clearly loves killing imps.

As Mando and Cara talk about the mission, the little dude creates some mischief by trying to fly the Razor Crest like a good little baby would! This in turn causes Mando and Cara to find a babysitter for him, so they head over to Kuiil’s ranch.

Upon their arrival they learn that Kuiil rebuilt and programmed IG-11 to be his protector and butler of sorts. We also get confirmation that Baby Yoda is definitely not a clone when he and Mando talk about Baby Yoda’s growth rate and looks, to which Kuiil essentially says that a clone or genetically altered being wouldn’t look so ugly. Ouch.

Mando tries to convince Kuiil to watch the kid, but he only agrees if he can take IG-11, and while Mando’s droid hate is stronger than ever, he relents to Kuiil’s demands, because he hath spoken and shit.

En route to Nevarro, Mando and Cara have an arm wrestling match, but this causes Baby Yoda to force choke her ass to protect is big buddy, which concerns everyone while also reminding us all of the little guy’s power set.

They group lans on Nevarro and is met by Greef and three of his henchmen. They make their way towards the town the client has locked down, but stop to camp out and finalize their plan of attack.

During their dinner they’re attacked by Dany’s dragons from Game of Thrones and Greef is wounded badly. Cara tries to heal him, but she’s out of med packs, so Greef prepares for his death oh so dramatically. But before his wound can take him, Baby Yoda springs into action and Force heals the dude Wolverine style! The group is once again stunned at the little dude’s abilities.

They group heads out in the morning, but as they arrive at the town, two of Greef’s men draw their blasters on Mando and Cara from behind, but before they can smoke them, Greef guns them down like a boss. Apparently the plan all along was to betray Mando, but thanks to the little guy’s magical powers, Greef has a change of heart, so they formulate a new plan.

Greef and Cara take Mando to the client as if he were their prisoner, while Kuiil is commanded to take Baby Yoda back to the Crest.

They return to the city and make their way to the client, who is holed up on the Bounty Hunter guild cantina. They pretend that they’re going to hand over Baby Yoda and Mando, but before their ruse is found out, Moff Gideon, aka Gus Fring, calls him to let him know he’s a failure, and then he has his Death Troopers open fire on the cantina.

The client gets waxed in the firefight, and the good guys are pinned down. Mando calls out to Kuiil to inform him that they’re screwed, but a pair of Scout Troopers were listening in on the call, so they speed after him and the babe.

Moff Gideon shows up in grand style in his foldable wings TIE Fighter and he threatens Mando and friends over the baby and how important it is to him. It’s as if he knew the Baby wasn’t with them the whole time, which is curious. I want to also note that when he walked, I didn’t hear spur sounds, so I now doubt this is who showed up at the end of Episode 5, so maybe the Return of Boba theory could be the winner after all.

Anyway, Mando frantically calls out to Kuiil, who now has Scouts on his ass, but after a few camera cuts, it’s revealed the Kuiil got gunned down, and that the Scouts have Baby Yoda in their possession. It’s frantic cliffhanger time friends.

At this point I think it’s safe to say that Deborah Chow is a boss when it comes to telling live action Star Wars stories for the small screen. Episode 7, like Episode 3, was tight, poignant, and offered up plenty of new core plot moments to help tie the previous three episodes together, while also showcasing the new bonds Mando has made since the last time a Chow directed an episode of the show.

I just loved how we got to see Mando revisit his new friends Cara and Kuiil, and how they both eventually agreed to help him in the name of the kid. It was some awesome character and world building, and showcased why these characters got top billing on this season’s poster.

I found Mando’s interactions with Kuiil to be my most favorite from this episode, and they’re made even more special and powerful thanks to the somber ending. Kuiil is hands down one of the greatest pure-alien Star Wars characters now, and his sacrifice and ways of thinking will never be forgot. He’s a true Star Wars hero and legend now, I just wish we didn’t have to say goodbye so soon. Damn Imp assholes!

He also gave us a great clue about Baby Yoda, who I can now confirm definitely isn’t a clone thanks to Kuiil’s explanation about gene farms and strand casts, but I might touch more on that in a separate video.

Cara was more of a fleshed out character in this episode too, and she complimented her male counterparts perfectly, but as always, the true star was Baby Yoda, who did more in this episode than any of the others combined.

Seeing him use the Force in familiar and new ways was awesome, and it just reinforces how powerful this little guy will be. I definitely think the Force heal was thrown in to tease some of the new Force powers we’ve been hearing about that will be in TROS, so I like that they decided to root that lore in this how. The Force choke was brilliant too, if not a bit disturbing.

I have to wrap with the arrival of Moff Gideon, who as I said above doesn’t seem to have spurs on, so my guess on the mystery character from Episode 5 is busted. But more importantly, Gideon definitely feels like a legit big bad, and someone who could possibly be Mando’s foil for the series. Giancarlo, as always, nailed the character, and without doing much but making calm verbal threats, you could feel how evil and powerful his influence is.

And yes we all hate him now because of what his forces did to Kuiil, which made for the saddest moment yet in this series. Rest in peace you free little ugnaught, I have spoken.

Deborah Chow has once again showed us why she's running the Kenobi series thanks to another one of her tight, poignant, and plot moving episodes of The Mandalorian. 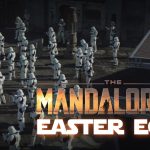 The Mandalorian Season 1, Episode 7 Easter Eggs and References – “The Reckoning″ 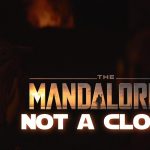