Oh boy, what an episode of The Mandalorian, but before I get into any sort of review, it’s Easter egg and Star Wars references breakdown time for “The Reckoning”.

You can check out the full dissection of this episode’s moments of note below.

Hey now Mandalorians, Matt Heywood here from the Star Wars Time Show to breakdown all of the easter eggs and Star Wars references found in The Mandalorian: The Reckoning, aka, S1E7, the penultimate one.

Once again we had an episode ripe with eggs and references, which starts with this lady on Sorgan, who to me is at least the same species as Sly Moore from the Prequels, or she at least puts shiny makeup on like Palp’s old adviser.

There’s another egg in this bar in the form of some dude sporting a Rebel commando helmet, the same Rex and them wore during the Battle of Endor.

The next egg moment may be more than what I could spot, but when Cara is in Mando’s gun cabinet she definitely pulls out a thermal detonator, I’m sure one of the featured guns is an egg, too, but I couldn’t place a particular one she pulled out.

Our next moment is a diabolical one, and that’s because we see Baby Yoda pull out a force choke on Cara as she arm wrestles Mando. Seems this guy has been watching some Vader highlight holo-vids.

We get the next egg in the form of Lando’s battle staff from his Jabba’s Palace disguise ensemble, which is being wielded by one of Greef’s hunters, who looks like he’s wearing Leet’s head on his own.

Greef’s other bounty hunter provides our next egg as he is a Nikto, a green one in fact, just like our buddy Neeku from Resistance, but not as good natured.

Baby Yoda was full of eggs and or references in this episode, because the next item of note belongs to him, and I’m calling it a reverse egg. Dude straight up heals Greef with the Force, and I think this is being put out there to setup some of the abilities we may see from Rey and Kylo in TROS. Just saying.

It was good to see Kuiil again, even if the ending of this episode made you a bit sad, but he did offer up an egg in the form of his communicator, which is like the one 3PO and Luke used in A New Hope.

Upon Mando’s return to the Bounty Hunter guild town we get to see some Scout Troopers and their speeder bikes, both quality eggs from the Age of Rebellion.

Once inside the common house, we see that the Client has employed a new bartender, and the bartender is a Death Star droid, complete with shiny chrome.

Unfortunately for the good guys, a squad of Death Troopers show up and pin them down, but by doing so they also gave us another easter egg by showing up.

Right after those dudes blast some holes in the cantina, an Imperial transport shows up, the same style we first saw in Star Wars Rebels, possibly on Mandalore.

And our final egg couldn’t be missed thanks to the grand arrival of Moff Gideon, who rolls up in a TIE Fighter, which apparently can fold its wings down now for landing.

Let me know what I missed, because you all always do, but that’s why I love ya.

The Mandalorian: The Reckoning Easter Eggs And References List 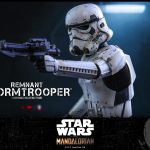 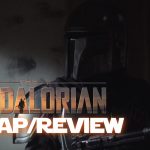 The Mandalorian Season 1, Episode 7 Recap and Review – “The Reckoning″