The Mandalorian: The Child is here, so I analyzed it for Easter eggs and Star Wars franchise references, but don’t expect to get 20 of them like the last episode, because this one only offered up six. That may be due to its overly short runtime, but for the sake of sleep and getting on with my life, I’m not complaining, but I am.

You can check out the full Easter egg breakdown for The Mandalorian Season 1, Episode 2 below.

Luckily for my sake, but sadly for Star Wars fans, this episode, which is super short by the way, didn’t nearly have the amount of eggs and references as the first. I found six in total with one being a bit cheap, but that’s how I roll.

Up first is the cheap one, and it involves an alien species made famous by another bounty hunter, Bossk. That’s right, we glanced them in episode 1, but I didn’t give them a nod, so now I’ll give the Transdoshans their proper due. They can’t fight to well, but they sure do disintegrate like champs.

The next egg is a big one, as it comes in the from of a Jawa sandcrawler, I’m not sure if that means we’re on a rocky part of Tatooine or what, but these Jawas whip the same fortress on wheels as their homies from A New Hope.

The Jawas also give us our next reference, which is to their power move over R2 in A New Hope, because just as Mando gets onto the roof of the crawler, a band of the little scavengers yell out the same war cry and then shoot their electrified blasters to stun the Mando out. Now he knows how R2 felt, and it doesn’t feel good.

And we’re not done with the Jawas yet, because the next time we see them they’re having one of their stolen goods fire sales and among the items is an R5    unit. Hopefully its motivator isn’t bad.

Man the Jawas really did inspire most of the eggy moments in this episode, because the next one comes in the form of a line the Mando says when he mentions that they don’t like him because he disintegrated a few of them, which has to be a call back to Vader’s warning about no disintegration’s to Boba back in Empire. Hell, we finally got to see what that looks like, so it’s a double bonus callback reference.

Finally, and I have to say that I’m already in love with Yoda Baby, but he gets the final egg-ice/reference moment thanks to his Force move on the beast that was about to kill Mando. It was reminiscent of Yoda’s impressive lift of Luke’s X-Wing, but on a smaller scale naturally. Most impressive, but talk backwards will he though?

Let me know what I may have missed by leaving a comment below.

The Mandalorian: The Child Easter Eggs And References List 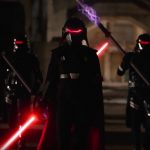 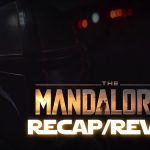 The Mandalorian Season 1, Episode 2 Recap and Review – “The Child″