The final shot of The Mandalorian’s first season offered up a mega-sized reveal, so I took that and ran with it a bit to riff on how the reveal could shape events we see play out in the show’s second season.

Head on down below to hear my thoughts on Gideon with the Darksaber, and how it could offer up some awesome new threads on Mandalorian lore and culture in the show’s next season.

Hey now Mando-lore hounds, Matt Heywood here from the Star Wars Time Show to riff on the ending of The Mandalorian and how it revealed that Moff Gideon is in possession of the Darksaber, an iconic Mandalorian blade forged by the first Mandalorian Jedi, Tarre Vizsla.

This tease was obviously put in place to get us fans speculating on what may go down in Season 2 between Moff Gideon and Dyn Jarren, mainly to reinforce that the antagonist is no slouch, and clearly has ties to Mandalore’s past, in particular the Empire’s siege of the planet and what it did to their people and culture.

Considering Gideon has the blade, it means that he more than likely was involved in the Empire’s purge, and that he either killed, or stole the Darksaber from Bo Katan Kryze, who is the last known Mandalorian to be in possession of it thanks to Sabine Wren giving it to her in the final season of Star Wars Rebels. Sabine had it after finding it on Dathomir, which is where Maul left it during the Clone Wars run.

So If Gideon did indeed steal or win it from Bo, it would only allow the show’s creators to fold in more Mandalorian lore to not only flesh out the show’s world more, but to also flesh out Dyn’s world with more detail and connections to other Mandos.

Gideon’s possession of it could allow any number of characters from either The Clone Wars, or Star Wars Rebels to appear now in an attempt to help Dyn get it, or learn more about Gideon from them. This could open up the door for appearances by any member of the Wren family, or even Bo Katan herself if she’s not dead.

The fact that it now appears that House Viszla, and possibly Death Watch saved Dyn as a child could also come into play with the Darksaber, namely because a Viszla first forged the blade, but also because it was in the possession of Pre-Vizsla for a time until Darth Maul won it from him in a duel to the death.

Hell, the fact that Maul once possessed this blade could also come into play next season. We would’t see him because he’s dead during the Mando’s present timeline, but we could get more flashbacks that show how he came in possession of the saber, or how essentially took over Mandalore himself for a period of time.

Either way, seeing the Darksaber in live-action form was a fantastic surprise, and one that is perfect for this show and its main character. Dyn will clearly have an interest in it, as well as other living Mandos, not to mention the Heavy Mando, who is a Vizla by the way, so having it show up just adds so many directions the writers can take the narrative in next season.

You can bet on how Gideon scored it being a main thread, so I can’t wait to see where Jon and Dave take this reveal. 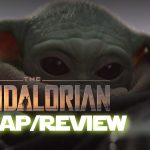