Max Von Sydow, aka Lor San Tekka in The Force Awakens, has passed away. Von Sydow acted in over 100 films during his 90 years with us, and is well known for his diverse portfolio that included blockbuster, art films, animated projects, and video games.

Fans of the Star Wars universe may also remember Von Sydow for his other fantasy and sci-fi related roles as Lamar Burgess in Minority Report, Emperor Ming in Flash Gordon, and the voice of Esbern in Elder Scrolls V: Skyrim.

While Max Von Sydow is sadly no longer with us, his characters will live on through history, and he will surely be known for a long time as one of the premiere actors of his generation. You can also continue to follow the story of Lor San Tekka through the comic series and other written works surrounding the Star Wars sequel trilogy.

Rest in Peace, Mr. Von Sydow, and May the Force be with you always. 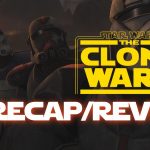 The Clone Wars Season 7, Episode 3 Recap and Review – “On the Wings of Keeradacks”