This episode brings Ahsoka’s time with the Martez sisters to a close while also setting up the show’s final 4-episode arc, which Sam Witwer has described as being the best ever Clone Wars narrative of all-time, so life is good for Star Wars fans. At least when it comes to The Clone Wars.

Head on down below to check out my full recap and review of The Clone Wars: Together Again.

Hey now fans of Ahsoka sorta becoming a Jedi again, Matt Heywood here from the Star Wars Time Show to recap and review The Clone Wars: Together Again, aka, s7e8.

The episode begins with the ladies still yelling at and blaming each other for getting locked up. Ahsoka lets the sisters know she has a plan and that they should trust her, which she kicks off after they’re brought to Mag Krim.

Ahsoka offers him a deal in which the Sisters will go off world to get the Pyke’s spice, and he agrees. As the sisters leave our Mando’s notice that Ahsoka isn’t with them, so their interest in her piques even more.

Meanwhile, Ahsoka breaks out of her cell because she’s a Jedi, so she heads out to cause some trouble while the Martez sisters discuss a plan to save her because Rafa can’t handle knowing that Ahsoka would rub it in her face if she freed herself.

This leads the sisters to try and steal spice from the Pykes to give to the Pykes, so Rafa shakes down a toong for the shipment.

While this is going on, Ahsoka is planting detonators all over the Pyke’s facility until she hears Mag talking to none other than Darth Maul. Maul is so boss he even senses her sensing him, so she runs off as he threatens the wrath of Crimson Dawn to come down on the Pykes if they don’t fix the spice issue. This reveal is pretty huge by the way as it places Crimson Dawn’s creation during the Clone Wars, something that wasn’t the case when they were brought up in Solo.

Ahsoka then discovers that Maul’s communication came from Mandalore, but she gets taken out by a horde of Pykes while doing so.

Rafa and Trace’s plan then gets called out by a Transdoshan, but after a good old brawl, they make off with the stolen spice.

Now the ladies are back together again, but when Rafa tries to deal with Mag, he tells them that Ahsoka is a Jedi and tries to play her lie off of them, but then all of Ahsoka’s bombs start going off, so all hell breaks loose.

Ahsoka and the Sisters get away in Trace’s ship, and after a great little dog fight chase scene, they head off for Coruscant, but not before we see Bo-Katan and her Mando’s following them in their own starfighter.

They land back in the Martez hanger and the sisters have a nice little emotional moment with Ahsoka, and thank her for her help. They do like Jedi after all, at least the Ahsoka type.

While everyone is singing kumbyah, Bo-Katan reveals herself and asks for Ahsoka’s help in dealing with Maul. Knowing this will lead her back to the Jedi, she hesitates to accept the offer, but thanks to a few words of encouragement from her new friends, she opts to do the Jedi thing and help the Mandos in need.

Alright, so this episode ends the first 4 part arc of Ahsoka’s final Clone Wars narrative thread, and I felt that it setup the final four episodes, which have been described as the best ever Clone Wars tales by Sam Witwer himself, perfectly. Yes this episode was still more about maneuvering narrative pieces, but the pieces we got are pretty crucial and in some cases enlightening for Star Wars canon.

First off, the Maul stuff was excellent and illuminating. I love seeing how fearful the Pykes are of him to start, but I also loved how he sniffed out Ahsoka while being on a whole other planet. The dude is a boss, and his scene perfectly reinforced that fact.

Also, when he mentions Crimson Dawn as already being a faction in the Collective, he is effectively weaving new Star Wars canon, because up until that mention, Crimson Dawn has only appeared in Solo, and based on any current Wikis, it didn’t form until after the Clone Wars, so Maul’s mention is pretty huge.

Finally, I really appreciated how Ahsoka and the Martez sisters wrapped their time together. I found their final goodbye to be meaningful and showed growth on everyone’s part, especially Rafa, who clearly has mad respect for Ahsoka at this point. Many fans didn’t like Ahsoka’s time with these ladies, but I found them to be solid narrative devices to allow Ahsoka to become her own person and grow a little bit before she was thrust back into her old life. It just gives her character more character if you will, and it feels like she’s grown by leaps and bounds thanks to her time with them.

Now on to the reunion we’ve all been clamoring for!

Ahsoka's first 4-part arch has come to an end thanks to this episode, and while it was mostly more setup, it did feature some fun action, and of course, some great lore with the appearance of Maul. 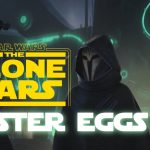 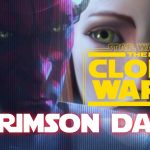