We got a Maul sighting in The Clone Wars: Together Again, but outside of that, this episode’s Easter eggs and Star Wars references were a little light. Head on down below to check them all out!

Hey now fans of Spice dealing, Matt Heywood here from the Star Wars Time Show to breakdown the easter eggs and Star Wars references found in The Clone Wars: Together Again, aka, S7E8.

This episode was a little light on eggs and references, but the few we got are impactful.

Up first we get to see some Toongs from Tung working for the Pykes, these are the same race as pod racer Ben Quadrinaros from The Phantom Menace.

This next one is pretty huge for Star Wars canon if anything else, and that’s the fact that Maul’s Crimson Dawn syndicate was indeed formed during the Clone Wars, and not after as many fan sites postulated after hearing about them in Solo. Either way we get to see Maul and CD is mentioned, so it was a solid scene.

I’m pretty sure this bozo is a Transdoshan like our buddy Bossk, so he makes the cut.

I have to also mention the awesome musical theme tribute to the Falcon’s escape from the Death Star while the ladies are fleeing the Pykes and Ahsoka is manning the guns. It’s hard not to get triggered emotionally when you hear the good old doo, doo, da doo, doo, da doo, da doo da da.

And finally Bo and her Nite Owls can be seen flying in a Kom’rk class starfighter, which were infamous among Death Watch members and Mandalorians.

Let me know what I missed by dropping a snarky comment below! 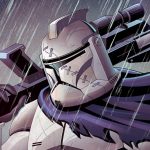 Meet Heater, A New Clone to be Featured in the Clone Wars: Battle Tales Comics 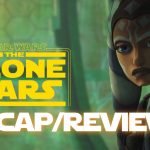 The Clone Wars Season 7, Episode 8 Recap and Review – “Together Again”