Ahsoka Tano returned to The Clone Wars in style in “Gone With a Trace”, which I recap and review down below.

Hey now fans of the young Fulcrum, Matt Heywood here from the Star Wars Time Show to recap and review The Clone Wars: Gone With a Trace, aka, S7E5.

The episode begins with a chills inducing moment as we get to see Ahsoka for the first time in The Clone Wars since she left the Jedi Order, and it is marked with Luke’s musical theme.

Unfortunately, her big moment doesn’t last too long as her speeder bike begins to fall apart, causing her to crash on a platform on level 1313 in Coruscant’s underworld.

Here she meets pilot and mechanic Trace, who promises to help Ahsoka fix her bike.

The two talk about the Jedi and Trace’s mistrust of them before a thug named Pintu shows up, who wants to collect some credits from Trace’s sister Rafa. Trace puts up a fight instead, but once she’s overpowered, Ahsoka joins the fray and easily dispatches the henchmen.

After this ordeal Trace takes Ahsoka to meet her sister Rafa, who in turn signs them all up to build 3 droids for a shady looking twilek.

Ahsoka and Trace rebuild the bots, but Trace forgets to put a restraining bolt on one, so when it activates, it goes haywire and runs off, destroying everything in its path.

Ahsoka and Trace eventually catch the robot in a loader, but it starts to climb a wall, so Trace jumps on its back and shuts it off just before it kills a little kid.

Unfortunately for her though, the bot then falls from a ledge, but then Ahsoka catches them with the lift they were on, but even that start to fall after Ahsoka hooks up a winch, so she stealthily uses the force to save Trace from falling.

The two meet back up with Rafa who still plans to sell the dangerous bots, and does for double the price, but this decision leaves Trace a bit uneasy, and causes Ahsoka to rethink her plans on staying with the two sisters.

The return of Ahsoka Tano was masterfully done in this episode, which started with an amazing introduction set to Luke’s theme, and ended with the inevitability that we will see her use her Jedi training to help those in need even though she wants to run from her past.

I really liked how Trace brought a brand new perspective on how citizens felt about the Jedi, who to them are responsible for the Wars and are not protecting those who need protecting in the underbelly of Coruscant. It just really showed how much the galaxy was gas lit on the Jedi thanks to Palpatine’s masterful planning and patience.

Finally, Ahsoka’s stealth force pull scene was pretty great, but I wonder if that little Twilek who saw what she was doing will rat her out to anyone. Maybe his stories of the force girl will be how Anakin and Kenobi know where to find her? Who knows, but for an arc kicking off episode, I found the return of Ahsoka to be pretty damn great.

This episode served as a great re-introduction to Ahsoka, who hasn't appeared in The Clone Wars since Season 5. 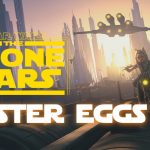 The Clone Wars Season 7, Episode 5 Easter Eggs and References – “Gone With a Trace” 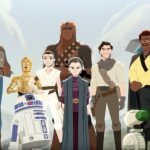