The Bad Batch arch came to close in “Unfinished Business”, which also featured a few interesting easter eggs and Star Wars franchise references. You can check them all out below.

Up first we get to see a 2-1B style medical droid helping Echo get back to a better place, and he’s also wearing the red threads of a grown clone.

We then see Echo in his new armor, which seems to be a loaner from the Bad Batch thanks to the skull logo on it, and based on the ending, this little nod foreshadowed Echo’s fate.

As the Republic heads out to carry out Echo’s attack, we can see a pair of Republic Consular ships, the same style that brought Qui-gon and Obi to Nute’s ship in TPM.

Up next is a cluster of CIS ships, but if you look closely you can see Core Ships in a unique configuration. These are the main sections of trade federation droid control ships that have been featured in the prequels.

Speaking of prequels, we can see a squadron of Vulture droids getting ready to meet the Republic’s forces.

And since we’re talking about Republic forces, during their attack of the assembly complex a squadron of BLT-B-Y bombers attacks, the forefathers of the Rebellion’s Y-wing bomber.

During the assembly complex attack a squad of Clone Jet troopers can be seen in action, the predecessors of the Empire’s Jumptroopers.

While Mace is trying to diffuse a bomb, a ray shield pops up to protect it, and we all remember ray shields thanks to one of the dumbest scenes and lines ever spoken in Star Wars courtesy of one General Kenobi.

And while we’re on Star Wars quotes, our final reference comes in the form of Trench calling Anakin Jedi Scum, a monicker championed by General Grievous himself.

That’s it my friends, let me know of my failings in the comment section below. 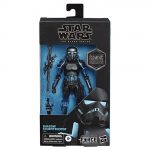 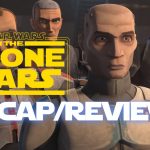