The Clone Wars continues to blow away expectations with its final run of episodes, and the penultimate, “Shattered”, continued that trend in a grand, but sobering fashion. Talk about some heavy Star Wars moments to process!

Head on down below to check out my full recap and review of the episode.

The episode begins with all of the bad guys being rounded up by the clones and Bo Katan, who welcomes back Ahsoka after her successful capture of Maul. She also somehow found Ahsoka’s lightsabers, so her eye sight is legit AF.

Ahsoka then heads to a call from the Jedi, who are discussing Palp’s shadiness, GG being found by Kenobi, and Anakin going to tell Palp about it. Ahsoka still isn’t ready to rejoin the Jedi as she refers to herself as a citizen when Yoda asks. Ahsoka leaves the meeting without leaving a message for Skyguy, as well as keeping Maul’s vision about him a secret from the other Jedi. Bad move, but understandable with all things considered.

Ursa Wren and Bo Katan lead out Maul in some wicked looking coffin built to contain Force users, and Bo says her goodbyes to Ahsoka as most of the Republic forces leave Mandalore.

On the bridge of the destroyer, Ahsoka and Rex reflect on the Clone Wars and what it has meant to both of them before Rex gets called to a briefing.

We soon find out what that briefing is, because we see both Maul and Ahsoka react with shock and awe as they both sense Anakin’s fall from the light, which coincides with Rex getting the Order 66 command from Lord Sidious himself.

Ahsoka runs to Rex to tell him about Anakin, but he’s already been programmed by 66, and while he struggles to just murder her right away, he can’t shake the programming and shoots at his friend. She tackles him and manages to lock herself in a room to prepare for another wave of clone attacks.

The clones bust through as Rex regains consciousness, so they open fire on her that rivals any of the Jedi murder sequences featured in ROTS, but like their successors the Stormtroopers, they missed with every shot, which is also a credit to Tano’s saber skills. She escapes through the ceiling and heads off to enact a plan.

Meanwhile, Maul senses the chaos and sees two Shock Troopers coming to blow him away, but just before they can do so, Ahsoka saves the day. Maul revels is the brilliance of Sidious’ plan with the Clones and wants Ahsoka to team up with him again, but she tells him he’s just a diversion, and leaves him with so saber to defend himself.

Ahsoka then heads to a droid depot to enlist the help of R7, Cheep, and GG, who first fill her in on 5’s report on the busted chips, and how rex was concerned about them, giving her the knowledge she needs to help fix Rex.

Maul on the other hand pulls off his best Vader in Rogue One impression by mowing down some troopers in a corridor as he looks for a way out.

The droids help Ahsoka trap Rex and cart him off to the med bay to scan him for the chip, but the chip isn’t showing on the scans. Ahsoka channels the Force and Imwe himself to find the chip, which allows the droids to remove it from Rex’s head.

While this is going on though, clones break through the door and starting raining fire down on Ahsoka, but just as she’s about to be overwhelmed by fire like her former compatriots, Rex saves the day by blasting his brothers. The surgery worked, but now they’re a team of two against a ship full of clones hell bent on murdering them.

I mean at this point in time, this Star Wars story arc is already shaping up to be some of the best to ever grace that far away galaxy. It’s as if each part just ups the previous one, and episode 11 was no different.

I once again loved the ROTS crossover, but I really appreciated how we learned that she passed on warning the Jedi about Maul’s Anakin vision, as well as leaving a message for her former Master. Both of these omissions clearly kept Sid’s plan on track, but it’s fun to know that there may have been a chance to save Anakin if she spoke up. Moments like this are why these episodes are so amazing and lore rich.

Of course the whole fall of Anakin moment was stellar and seeing Maul’s and Ahsoka’s reactions were both beautiful and sad. Although, I think watching Rex struggle to not kill Ahsoka immediately while shedding a tear may have taken the cake for this episode’s most sad moment.

You have to also appreciate getting a clear resolution to the mystery about how Rex avoiding killing Ahsoka too, so Filoni just keeps on nailing his narrative weaving.

What a magical ride we have been on these past three episodes, one more to go, and it’ll probably hurt the most.

We are living through some amazing Star Wars stories right now, and "Shattered" just added more and more layers to this amazing run of episodes. 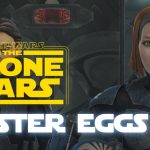 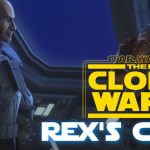