At this point it’s safe to say that we are living through some of the best Star Wars tales to date with The Clone Wars’ “Siege of Mandalore” arc, which just dropped another gem on us with “Shattered”.

Before I wax poetic on its merits though, it’s Easter egg and Star Wars references time, so head on down below to check them all out.

Hey now fans of some of the best Star Wars stories any of us have ever seen, Matt Heywood here to breakdown the Easter eggs and references found in The Clone Wars: Shattered, aka, S7E11.

Up first we get another great crossover  moment with ROTS when we see Mace and the other council members discussing how they’re starting to sense something fishy with the Chancellor, and how they sent Anakin to inform Palpatine that the war was almost over now that they found Grievous. Of course we knew of this from Sith, but we do get the reveal that Ahsoka passed on leaving a message for Anakin, as well as telling the Jedi about Maul’s vision about him, which are two huge missteps that we can’t blame her for, but can now see how egregious they were.

Up next we get to see some of the hated Shock Troopers preparing to escort Maul to Coruscant.

Speaking of Maul, his coffin like prison is adorned with art that I think has an homage to Tarre Vizsla, the first Mando Jedi, but if anything else, the contraption prompts a mention of the Jedi-Mandalorian wars by Bo, a period of time hinted at in KOTOR and some Legends tales.

Alright, now for the heavy hitting references, which naturally start with Anakin’s fall, which both Maul and Ahsoka feel, as we get to hear familiar dialogue being delivered by Hayden himself as he falls from the light and helps Palp defeat Mace. Phew, what a moment.

And things only get heavier from here as we see Lord Sidious himself delivering Order 66 to Rex, who tries his damndest to fight it back as Ahsoka rushes in to tell him about Anakin. He gives us another nice reference when he mentions finding fives to Ahsoka, which is a nod to the arc from Season 6 in which 5s discovers the whole Order 66 plot.

As the clones and Rex are trying to murder Ahsoka you get hints of Anakin’s Dark Deeds theme from ROTS and it really hammers home the horrific moment.

When Ahsoka frees Maul he makes a reference to hearing all of the Jedi cry out when Order 66 was enacted and feeling their collective pain echo through the galaxy. I will also admit I was a bit off on his grasp of Sid’s plan, as he didn’t know about the chip and Order 66 after all, just the fact that the Clones were used to draw the Jedi into war. You were right commenters, on that one at least!

Ahsoka eventually heads to a droid depot and activates a familiar droid in R7, who is her personal astromech, but I also have to mention Cheep, who is 100% related to Chopper, and could be his Daddy. I mean the disc, the arm, and the voice are pure Chopper-esque.

I’m bringing this next scene up for a few reasons, first we get to see how Ahsoka learns about the Chips, so that’s an important reference, but for the life of me I can’t figure out who the lady is that pops up in R7’s report. I’m pretty sure the clones were 5s and Tup, but this lady seems like she’s important or at least a nod to some key thing that I’m missing. Was thinking Satine, but don’t think that’s the case and it doesn’t line up. Anyway, I’m sure one of you will fill me in on this miss.

Ahsoka uses Anakin’s passcode of 8108, which upon some research, could either be an egg for Hayden’s birth year of 1981 and the launch of Clone Wars in 08, or it could reference the theatrical release of The Clone Wars, which was 8-10-08. You pick which one works better for you, but I had to look those numbers up after she said them.

Ok this next moment was killer in more ways than one, because we get to see Maul just go nuts with the Force only, but his corridor charge is a direct nod to Vader’s moment in Rogue One, complete with dudes getting force slammed to the ceiling, blasters being force pulled, and of course the franticness of the moment as the clones hurry to reach a blast door.

And here’s a nice and pure egg in the form of a FX-7 medical droid. This one was easy.

And finally, we end with Ahsoka channeling our guy Chirrut Imwe and his favorite saying as she repeats I am one with the Force, and the Force is with me as she tries to scan for Rex’s chip. Brilliant.

You know the drill, fill me in on what I missed or join in with some comments to let us know what you thought about these moments. 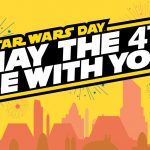 Get Ready For Some Star Wars Day 2020 Deals 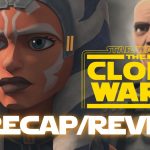