Thanks to SFX Magazine, a few new insights have been provided for The Book of Boba Fett from both Temuera Morrison (Boba Fett) and Ming-Na Wen (Fennec Shand). Although, the juiciest insights comes from Morrison on what type of answers we will get for Boba’s life after his apparent death in the Sarlacc Pit.

Before we get there though, Ming-Na has some more insights into how the show will dive into the world of bounty hunters and how her character and Boba will interact. On bounty hunters in general she said that the series will:

“delve more into the life of bounty hunters”

Wen also teased that the series will delve into the relationship between Boba and Fennec. She said:

“In The Book Of Boba Fett there will be a lot of exploration of the dynamics between Boba Fett and Fennec Shand, how they complement each other, and what they get out of that relationship. He’s someone she respects and they have definitely bonded with him saving her. It allowed her to realise that she might be better off not being solo anymore. She sees her alliance with Boba Fett as a very smart move, in the sense that she’ll have somebody watching her back. And even though it might be an extra baggage to have to align herself with someone else, the reward for her at the moment is greater. And you know, Boba died – or we thought he did – in the Sarlacc pit, so I think that both of them share those near-death experiences in common. They both have a vulnerability that they understand.”

The article also went on to report that the Slave 1 has been rebranded as its model name, which is Firespray. It’s not clear if that’s how it will be referred to in the show if the name is spoken, but it really isn’t a huge deal, as it’s mostly done for toy marketing.

Temuera Morrison also offered up some quotes on how Boba’s mystique will be handled in the series and if he will remain as mysterious as he’s been showcased so far. It sounds like Morrison felt like they were pushing the envelope too much at times and may have killed some of Fett’s mystique, but ultimately he trusts the team. He said:

Yes, and that’s where we kind of opened up too much of the can at times, I think. I did have my reservations, but hey, I trust the people I work with. I was so lucky I had people like Dave Filoni who has an ability to connect some of the dots – some of the ancient dots – and to keep that authenticity. I relied on him a lot, because I’m not one of these actors that reads every comic book and every bounty hunter book.

Finally, when asked about if the show will cover Boba’s timeline gap, meaning the time that passed from his apparent death in ROTJ until his resurgence in The Mandalorian, Morrison promised the answers will flow. He said:

And that my friends is what most long-time fans are wanting to hear. Hopefully we get some deeper insights into his resurrection, but also the character himself before his time featured in The Mandalorian Season 2.

Nick and I will talk more about these interviews in next week’s episode of the SWTS, so don’t forget to tune into the Star Wars Time Show on a weekly basis via our podcast platforms or via YouTube if you prefer the livestream angle. 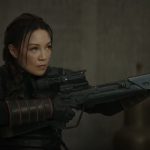 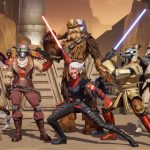