Lucasfilm shared the first teaser trailer for The Book of Boba Fett today, and while it kept things close to the proverbial vest, it also confirmed at least one production leak we’ve covered on the show last spring. It may even show the moments before another potentially massive leak happens, but that’s just speculation on this particular data dump at this point in time.

While the trailer breakdown below is mostly rooted in speculation based on what was shown, there could be potential for some of it to be SPOILERIFIC based on the aforementioned leaks, so proceed with CAUTION.

Hey now Fans of the Fett, how about that first teaser for our dude’s book? While the trailer kept things close to the vest, it definitely didn’t disappoint, and it even confirmed a leak we have discussed on the show. I even think it showed the precursor to another major leak we broke down, so enough with the intro, let’s get to breaking this teaser down.

To kick things off we get a Spider Monk appearance, and if you are wondering, yes that is a brain in the glass container.

Apparently Boba has enlisted these machinations as his servants in Jabba’s castle, because I’m pretty sure this bot is also a spider monk. You can also see that Fett’s armor is slightly refreshed here with a new  knicks in it, and a slightly different shade of green than his freshly painted kit from Mando S2.

In regards to the initial dialogue of I am not a bounty Hunter, which then gets a reply of I’ve heard otherwise, I believe this conversation to be taking place between Fett and the Ithorian character shown in this trailer, but more on that later.

Up next we see Fett and Fennec walking through the streets of some hub on what has to be Tatooine. They’re more than likely making their way to a meeting with the aforementioned Ithorian, who seems to be in charge of something.

So here he is, the Ithorian, who is more than likely a major player in the Underworld scene. This has to be confirmation from an April leak on Boba butting heads with a crime boss that looks like Hammerhead. In fact, this trailer more or less plays out the entire leak in that Boba and this dude tussle early on, but eventually will have to work together to face a bigger threat.

Anyway, and yes he sounds like Din, but it’s not Din talking when the Ithorian says, I know you sit on the throne of your former employer, so he clearly is interested in Fett’s next moves.

We get a sprawling shot of one of the largest cities we’ve ever seen on Tatooine. It’s not clear if this is just the extenuation of Mos Eisly, or a whole other city, but this seems to be where Fett is meeting the Ithorian underworld character.

Boba gets in on the voice over game by saying Jabba ruled with fear, at which point we get to see what appear to be a showdown between Fett and his guards, and the Ithorian and his guards in these maroon getups. This skirmish was detailed months ago in a leak, so all of that stuff is appearing to be true now, at least the idea of Fett and this Hammerhead boss being at odds at first, but then ultimately coming together to fend off a larger threat.

This next shot, which features Boba’s pledge, probably to the Ithorian, to rule with respect. I’m guessing this moment happens right before he and Fennec head in to meet with him.

We then get a rad shot of the palace with what looks to be some figures approaching it. Fennec then says to a group of ugly looking characters, You were all once captains under Jabba, so this meeting is probably going to happen in the first episode of the show to try and build support for Boba’s takeover of Jabba’s assets.

Boba follows up with a claim that he’s here to make a proposal that is mutually beneficial to this shady lot, so he does seem to want to build his brand without using force at first, but I doubt that holds up.

It’s not clear if this shot is still of Boba’s new palace, but it is clear that he and Fennec are glued at the hip. Although it does look similar to the room he was in in the first shot, so this probably is the penthouse suite at old Jabba’s place.

The trailer starts to build towards its action moments as Boba proclaims, Why speak of conflict when cooperation can make us all rich. We then see a group of what looks to be Sandpeople, but in darker robes like the ones we saw Nomad Boba wearing in Mando, so maybe this is a flashback to his time with them in the desert.

Either way, his proposal does again lead us all to believe that he’s trying to build up support through common sense and greed versus death and destruction. Maybe the Dune Sea did change him after all.

This door entrance I believe is en route to see the Ithorian, and I doubt those guards will be leaving with them based on an early scene in this trailer.

Hey now, Twileks, yeah buddy! We know that both Boba and myself have a thing for these exotic looking Star Wars aliens!

So back to this dinner of the captains, and we can see that Boba’s goals will not be easily achieved thanks to people like Captain Dog Man here who threatens, What prevents us all from killing you, and taking what we want.

Notice the side eye between Fennec and Boba, I’m pretty sure that’s the signal to kill this bum, so I’m guessing not all of Jabba’s former captains will be leaving this dinner alive.

We then get a shot of Boba’s helmet rolling on the ground and filled with credits. Obviously he’s not dying, but I do think this fight will be between the Ithorian’s men and Boba and Fennec after their little meeting.

In fact, I can totally seeing this fight leading to another leak we’ve discussed, and that is the one in which Boba ends up riding on the back of a rancor in the streets of a city in Tatooine. I’m thinking now that Boba probably had the Rancor ready as a backup plan if his meeting with the Ithorian went bad, so I’m hoping we see this leak play out with Boba getting the edge by using a rancor to mess these dudes up and confirm his supremecy on Tatooine to the underworld.

Finally, I think this scene will take place very early on in the series, and I believe Fennec is addressing the same captains we saw from earlier. This is probably right when they show up after hearing what Boba Fett did to Bib. I like how she threatens the group with the line, If you had spoken such insolance to Jabba, he’d had fed you to his menagerie. We all know what that is and I still think Boba will be using a Rancor as discussed previously.

You gotta love how concerned all the captains look from this line and Boba urging them to speak freely, something they probably shouldn’t do if they know what is best for them.

Like I said, the trailer offers almost nothing tangible to latch onto, but with some hindsight and our leak coverage, it definitely offered some plot confirmations and the general tone of the series, which is something I think all fans are ready for.

Make sure to tune into the next episode of the Star Wars Time Show in which myself and my co-host Nick will fully breakdown this teaser and give our thoughts on it as a whole. 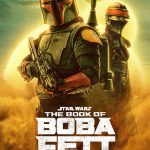