The Book of Boba Fett Season 1, Episode 4, aka “The Gathering Storm”, is upon us, so make sure to check out our full Easter egg, Star Wars references, cameos, and key moment breakdown video to squeeze every bit of lore and detail out of it.

Hey now fans of the Boba, it’s time to breakdown another chapter of his book thanks to the arrival of S1E4, aka, The Gathering Storm, or the one with more mods and less rodriguez.

Let’s get started with the Easter eggs, references, and cameos.

Up first, we see the flares being used by Mando and the noob bounty hunter to try and capture Fennec, which finally shows us how Boba found her nearly dead body.

Then we got a nod to Boba’s soon to be vespa gang at the mod parlor where he brought fennec, so one could say their partnership in the present was written in the stars.

I’m pretty sure the mod doc, who is played by Stephen Thundercat Bruner for our cameo of the episode, has a B2 hand before he changes it out for his mad scientist swiss army knife attachment.

Boba refers to the Slave 1 as his fire spray gunship for the first time in live action, which is surely to get fans in a tizzy for no reason, so prepare for a helping of “They’re killing his legacy and Disney sucks” noise on your socials this week.

In what can only be seen as a demotion, it appears EV-9D9 is now a sous chef rather than the Boss of Droids. Maybe it’s his punishment for not realizing his new server droid R2 smuggled a lightsaber on board that ultimately led to the sail barge disaster.

We also get to see a COO-cook droid, which was first referenced in AOTC on the refuge ship Anakin and Padme are on. He also gives us an undeniable nod to General Grievous when he goes into Ginsu mode with his knives. We were just missing a Hello There from Boba to perfect the homage.

It looks like EV was preparing sorgan frog stew, which are the species of frog our little buddy Grogu liked to murder.

Bib’s kitchen wasn’t done yet with eggs and references because we got to see a LEP Droid for the first time in live action. These little suckers first appeared in The Clone Wars movie, and they clearly believe in sepakku when they feel their honor is lost. Luckily, it looked like this guy did turn himself back on at one point because he shows up in the palace again.

What would a Star Wars show be without a gonk droid? Not a star wars show, so luckily we got a 4-legged one in this episode. RIP you walking explosive!

What would an episode with the Slave 1 be without a firing of a seismic charge? A less cool sounding one if anything else.

I questioned including the flashback of the stinger scene from Mando, but I’ve already said something about it, so here it is. The Bib kill shot.

And to round this list out we got a triumphant return of Mando’s theme song, which opens up all sorts of Super Friends possibilities for the show’s final three episodes.

It was awesome to finally get clarity on how Boba found Fennec in the desert and healed her gut wound. I had been wondering if he was tracking Mando somehow, but that never made complete sense considering his situation, so seeing how his save played out was the type of fan service us lore hounds need. Love them or hate them, this moment also provided a tie to the Mods in Boba’s present as Fennec is essentially one of them thanks to her new gut parts.

We got all kinds of answers in this episode about Boba’s motivations post sarlacc pit escape, and it appears one of his main drivers for claiming the throne besides what happened to his Tusken clan is the fact that he’s tired of working for idiots as a bounty hunter. He really was just tired of watching people like him die for bozos and wanted to try and change the game when it came to being a Gotra.

The whole reclamation of the SLave 1 was a cool scene to watch, but the real key moment is that it made Fennec want to stick around with Boba versus taking off, which was what she promised in her original deal to pay off her debt to him. Between Boba’s pitch to rule and the thrill of getting his ship back, she decided it may be worth her time to stick with the new Fett, so we got to see fully how they’re bond formed prior to the events of Mando Season 2.

Yo Boba mowing down the Nikto bikers is about as vintage Boba as it gets, so are we happy he got a little murderous finally? I loved how this scene was shot and seeing the Slave 1 creep up on them was a thing of vengeful beauty.

The return to the Sarlacc was surprising to me, but I guess it makes sense that Boba thought his armor was still in there as he was delirious when the Jawa’s jacked it. If anything we got to see the Sarlacc trying to eat the Slave 1 and its death, which I thought already occurred thanks to Boba burning his way out of its gut, but taking a seismic charge to its beak works for me too. RIP the Great Pit of Carkoon. For real this time.

For those that may be thinking Fennec will turn on Boba in the present for his perceived weakness, her line about the Tuskens making him weak is pretty ominous. She clearly worries about this from the start of their relationship, so it’s definitely still weighing on her in the present.

His rebuttal of living with the tuskens has made him stronger because you can only go so far without a tribe provided great insights into how much his time with them really did fundamentally change his outlook on life, as well as his need of belonging. This mantra is what is motivating him to rule with respect in the present, and while Fennec still may not like it, I do believe his alliances through respect will ultimately win the day for him when all looks lost.

So we learn from a droid that Boba is now fully healed, which could mean the final three episodes all take place in the present, as the bacta tank was our vehicle to his past, but I’m thinking we still may get a look at how he ended up learning that Din secured his armor from Cobb and how he tracked him to Tython to reclaim it. That is really the only thing left from his past that isn’t fully clear at this point, so I wouldn’t be surprised if the flashbacks continue through some other vehicle than the bacta tank.

You have to love that Krrsantan has essentially become one of the main characters in this series. He’s been in three straight episodes, and in this one we get to see the hate he and all wookies have for Trandoshans, their enslavers during the Empire. Plus you got his gladiator history explained to you from the lovely Garsa fwip, and Boba brining him into the mix, so here’s to the big guy and his starring role in a Star Wars series.

Obviously Boba’s deal with the other families is key to the plot moving forward, but to me seeing them taunted with the rancor was awesome, and almost paid off on a prediction I had months ago that Boba may have purposefully setup dinner on the Rancor pit to wipe them all out. While we didn’t get that, he did ultimately use the rancor to get some sort of deal, so I’ll take the half win.

All die hards, at least those of us who seek out leaks and whatnot, were probably not surprised to hear Mando’s theme song being played when Fennec mentions hiring muscle, but it was awesome to hear none the less and has me excited for his Book of Boba debut. While there’s a chance we may get Din Djarin in a flashback still, his theme playing to me confirms he will appear in the present if anything else.

You have to wonder if Fennec and Boba are planning to hire out the whole Bounty Hunter guild to come help, which would allow some iconic hunters to be brought into the fold like Bossk, Greef, and others, or if they’re solely leaning on Mando and his ties to other mandalorians. At this stage I don’t think Din would have reverted to being a bounty hunter again, so maybe he comes with the owls, or maybe he does reunite with some former hunters. If anything Din is coming, and based on rumors he may be whipping an N1-Starfighter, so I can’t wait to see what his theme music in this episode ultimately leads to.

This was a solid episode heavy on world building and Boba lore, so it was a winner for me. The pieces are coming in place for a helluva ride over the final three episodes and we are finally out of trailer territory, so everything we see next will be fresh. I’m holding out hope for more flashbacks even though the plot device to get us to them seems gone, but if we are present timeline only for the final push I’ll be ok with that, especially because we know da da dad da daddy da is coming, and that will only lead to more Star Wars excellence. 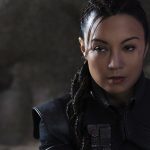 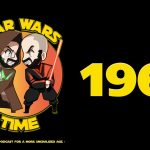