The Book of Boba Fett Season 1, Episode 3 is out now and we have broken down its Easter eggs, Star Wars references, cameos, and the key moments that shed light on past Boba lore and what may be in store for the remaining episodes. You can check out the full breakdown below.

We will also take a deep dive with it on next week’s episode of the Star Wars Time Show, so make sure to follow us on our podcast platforms or via YouTube if you prefer the livestream angle.

Hey now fans of Vespa biker gangs, it’s time to breakdown The Book of Boba Fett S1E3, aka, The Streets of Mos Espa, or the one with Danny Trejo in it.

Let’s start with the eggs, references, and some cameos!

To start things off we get the Bomar Monk, aka, a spider droid, who are bodiless monks that chill around the palace getting their enlightenment on.

We then get our first cameo of the episode in the form of Stephen Root, who plays Lortha Peel. Among other comedy roles, Root is the Have you Seen my Stapler guy from Office Space.

Upon Boba’s return to the palace a Worrt can be seen eating and I’m just going to say it’s the same one from Return of the Jedi, because why not.

During the flashback Boba travels to Mos Eisly and while riding through the streets you can see the Trooper buckets on pikes, which we glimpsed in Mando, and if you you looked carefully, you could also see Peli Motto and her pit droids, rounding out this scenes plethora of references to past Star Wars.

This pyke dude mentions Oba Diah, which is their homeworld, and was featured in The Clone Wars.

We finally learn the name of the Nikto gang, which is Kintan Striders, but that is also the name of one of the creatures we’ve seen on a dejarik board, which is a bit of a deep cut.

The next cameo may turn out to be a recurring character, but Danny, Space Machete, Trejo shows up as a rancor keeper. Oh yeah, there’s a new rancor too!

While in the pit we get all sorts of references to familiar Star Wars lore starting with the Witches of Dathomir line, who played a large role in The Clone Wars series.

Then Boba mentions riding something 10x the size of a Rancor, so one has to wonder if it was a cheeky nod to the Holiday Special cartoon in which dude rides something called an ichyodont, which is basically a dinosaur. I’d say the line was definitely a tip of that hat to that iconic mess of a show.

And to round out the references, Boba tells Danny to get a ronto for the rancor to eat, which are the big ass dinosaur looking things from A New Hope’s special edition cut.

If you had Fennec on your Dank Ferrick bingo card, then you win, as she is the first to utter the expression made infamous by Din Djarin in Mando.

This episode had a few deep cut references, but this next one is the deepest of them all, because that painting you saw the Zoomers bust through is actual Ralph McQuarrie concept art for the Return of the Jedi. Hell, Boba himself is painted in the damn thing, so how’s that for getting meta!

During the chase scene we see a rickshaw droid, which was also featured in Attack of the Clones when Anaking and Padme returned to Tatooine in search of his Mommy.

And finally, the Major Domo crashes into a meiloorun fruit stand, which is a fruit that was a plot point at one point in time for a Star Wars Rebels episode.

I enjoyed learning a bit more about what happened after what 8D8 calls the sail barge disaster. We learned that while Bib took up Jabba’s mantle he had to rely on a 3-pronged alliance with the Transdoshans, Aqualish, and Klatoonians to maintain his power and control. This is what also led to the Mayor getting very rich, so one can really start to see now why the Mayor isn’t a fan of Boba taking over, and why as we learn later that he’s siding with another syndicate.

Lord Fett’s treatment of the Cyberpunk gang is just another example of how much his time with the Tuskens and living in the Dune Sea changed him. Rather than just killing them all he offers them work and pays off their debts. His benevolent approach may bite him in the ass at some point, but you can really tell that he’s trying to rule with respect and build actual alliances built on that and trust versus fear and pain, which in the end could actually help him out in a very sticky situation.

In the episode’s gut punch moment we learn, at least on the surface, because I think the Pykes probably also had something to do with it, that the Kintan Striders wiped out Boba’s new family. The Chief is dead, the little boy is dead, they’re all dead except for maybe the Warrior. I do think this was her staff, but when it comes to fiction, unless you see a body you can’t say the character is officially dead, so I’m holding out hope that she survived. I guess we didn’t see the kid’s body either, but Boba taking the stick out of his robes kind of implies he picked it up while burning bodies, so he’s probably gone, but there is a remote chance that he lived along with the Warrior.

How about the Santy sneak attack! That is not someone I’d want to be waken up by either. While the fight was OK, I do wonder how he got in there unnoticed. I doubt wookies can move like Ninjas, so unless he climbed his way up to Boba’s room, I’m not sure how he got in unless he was let in.

Hear me out, is there a possibility that Fennec let him in? You can tell from her side eye and other dialogue that she doesn’t agree with Boba’s weaker approach to all of this, so maybe she’s beginning to plot her own takeover. I could be way off, but when it comes to anti-heroes, you can never trust them in full. It just seemed odd that a freaking Wookie was able to stealth his way all the way to Boba sleeping without a single person in his crew noticing him before hand.

The Twins shed all sorts of light on what is actually going on at this point, so learning about Mok Shaiz’s shady deal with another syndicate and the fact that the Twins are scared enough to leave the planet, hints that a much bigger threat is in the shadows, and I don’t think it was the faction revealed at the end of the episode.

Boba with the rancor was a thing of beauty, and I think it definitely confirms the whole Rancor riding leak from a few months back. While it’s arguable if Danny the Rancor Keeper is truly there to help train the pet versus having it kill Boba, I still think this scene foreshadows him riding it and using it as a show of force to finally take down his detractors in the finale.

Ok, so I’ve seen some of the negative chatter on the speeder chase, and I will agree it was jarringly slow looking, but I’m not going to let stuff like that piss on my Book of Boba Cheerios. Yes, I don’t think Robert’s done great with some of the visuals and action bits in his episodes, but I’m still a fan of the slow burn approach to Boba’s two storylines, so with the lore those are slowly exposing, I can forgive the wonky visuals and other shortcomings for now. If anything, we learn the Mok Shaiz has further betrayed Boba by fully siding with the Pykes, who may be the syndicate the Twins referred to.

While it’s made to look like that the Pykes are Boba’s big bad in the present, which would line up with his actions from the past, he clearly has screwed with their operations on Tatooine even before becoming its Daimyo, so they have beef with him, but the fact that they were revealed as the Syndicate that Mayor is siding with in Episode 3 makes me believe that they’re still not the true power players in this space opera.

Like I said on the Star Wars Time Show, I’m going to die on the Crimson Dawn and Qi’ra are behind all of this sword, so I do still believe they will be revealed as the ultimate string pullers, but I’m glad we are slowly starting to see more of the underworld web being untangled in the present timeline.

You can’t win them all right? While this episode was a step down in overall quality from the second, Star Wars is Star Wars, and I’m not minding the slow burn delivery as much as other fans. I do think it’s fairly clear what is all going on. Boba wants to clean up Tatooine in the present to help avoid the atrocities committed on Tuskens and other helpless inhabitants of Tatooine, but the existing power structure wants nothing to do with it, so he will be challenged and undermined at every turn.

The real question is who is ultimately behind messing with him and why are they really doing it. Like I said I think its CD and Qi’ra because they do have a past from War of the Bounty Hunters, but unless she wants to punish him for capturing Han, I can’t sniff out her true motivations for wanting to take over his territory considering that it wasn’t her major focus for the Dawn. She wanted to take down the sith, not necessarily be the face of all crime syndicates in the galaxy. Hell she could even be dead at this point based on canon information from the Crimson Reign comic series, but like I said I’m sticking with my initial prediction from December 8, so CD it is until proven otherwise. 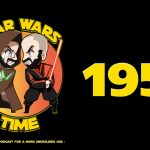