If you’re still feeling uneasy about The Book of Boba Fett after watching “The Tribes of Tatooine,” aka, Season 1, Episode 2, then Star Wars may just not be for you. Let’s just say things got a bit beefier, hairier, and spicier in Episode 2.

You can check out all of the key Easter eggs, Star Wars references and key moments below.

Hey now fans of Dances with Fett, it’s time to breakdown S1E2 of The Book of Boba Fett, aka, the Tribes of Tatooine, or the one that should make salty Star Wars fans happy.

Let’s get right to the eggs and references featured in this episode, which started with an awesome but rancor-less nod to Jabba’s infamous Rancor pit, first seen in ROTJ.

This episode was a bit of a rogue’s gallery of cantina aliens from A New Hope, species at least, and the first to debut is the Ithorian Mayor. Another interesting point of note is this is the first time in live action we see this species use a communicator, which has been featured in animated star wars previously.

Sticking with cantina alien species, we also see a Chandra-fan at Garsa’s, and while I’m on the tour of alien types, there was also a long hair Zutton, or an alien like Snaggletooth.

Boba drops a mustafar mention when he says Garsa is sweating like a gumpta on said planet.

I’ll talk about the Twins later, but the biggest egg of this episode has to be the live action arrival of Black Krrsantan, an infamous wookie bounty hunter from Marvel comics that would definitely know of Fett from his bounty hunting days. This also confirms a leak from close to a year ago when some thought this bad dude would show up in Mando S3.

Boba drops a Nal Hutta mention while taking with the Twins, which is the seat of there power and a well known Star Wars planet.

During the flashbacks we get to see the Pykes running spice for the Syndicate, but what’s even cooler, we get to see maskless Pykes in live action for the first time.

If it weren’t for the trailers the Camie and Fixer Lonenzer cameo would’ve been huge considering their ties to Luke Skywalker and a deleted scene from A New Hope, but at least we got confirmation it was them via captioning and the credits, and yes they were at Tosche Station. Apparently Luke and them may have used picking up power converters as an excuse to get schlitz at the bar as teens living on Tatooine, instead of actually picking up power converters.

After the Pyke train is captured you can see Boba sitting near some familiar looking Camtonos, and he also mentions Sasanna spice and anchor head while negotiating with the Pyke leader.

Finally, and I know Kamino was featured last week, so I don’t need to really cover it again, but the flashback we got this week really felt like it may have been a cut scene from Attack of the Clones.

Daniel Logan is credited as playing Young Boba, and it didn’t appear to be a de-aging job, so I do wonder if the scene was repurposed from AOTC to show Boba’s issues with being alone. Hopefully Daniel or someone from the production provides answers later today.

And now for the key moments…

In the crime world you never know who is telling the truth, but I do think the Mayor isn’t kidding when he mentions that he didn’t send the Night Wind after Boba. Was it the Twins, the episode makes it seem that way, but why not just take him out during their exchange? This leads me to believe that the true threat to Boba’s rise is still in the shadows, and that threat is none other than Crimson Dawn and Qi’ra as its head as long as events from the Crimson Reign comic don’t screw my predictions up.

Obviously seeing new Hutt’s and a familiar black haired wookie was awesome, but their arrival is also key to Boba’s present timeline story. Are they self motivated to finally take over Jabba’s territory after all these years, or is another force that rhymes with Jira pulling their strings?

While it may seem like multiple factions are trying to take Boba out, I do believe one is at the heart of it all, and that one is the Dawn.

As a fan of lore, I greatly appreciated seeing Boba early on training with the badass female Tusken in the ways of Gaffi stick combat. This allows us fans to see just how Boba became so skilled with the weapon, and how he was able to use it to dispense of Stormtroopers with ease in The Mandalorian.

The initial arrival of the Pyke crack train provided another moment for Boba to see how poorly Tuskens are treated by outsidres, especially those who inhabit Boba’s former underworld scene. All of these tragic moments are what lead to his renaissance and the new version of the character we are seeing in Mando and now the present timeline of Book of Boba.

The whole tosche station beat down and speeder bike heist was great, because it had some deep cut easter eggs, Temuera popping off with a training Gaffi stick, and another reminder that Boba Fett can be a force for good after his near death at the pit of carkoon.

Like the Tosche scene, the entire train heist segment was fantastic. It had solid action and tension, great team work between Boba and his new quasi family, and of course the conductor droid was pretty fun to watch work too.

Although, I believe the key aspect of this scene to be the negotiations in which Boba secures a toll for the Tuskens. I do believe him telling the Pykes to take this news back to the Syndicate not only starts to establish the fact that Boba has grander plans for himself than returning to bounty hunting, but it could also be the first signal that Crimson Dawn notices what he’s trying to do on the planet as they were the ones running the Syndicate at this point in time.

To close out the key moments I have to honor the last part of the episode in full. Everything from Boba’s lizard-LCD induced spirit walk to his Gaffi stick dance at the end was just brilliant in showcasing Fett’s full acceptance into this tribe.

I loved the visions of his former self and him reconciling with his past. The Dune Sea tree where Tuskens get their Gaffe sticks from was rad to see, as well as how they create them. Of course the robe ceremony with its nods to Boba being dressed in his armor from episode 1 was cool to see as well. Hell, this was the moment Nomad Fett from Mando was born, so it was a great full circle moment for fans of Star Wars lore and the Fett.

If you were salty about the first episode and still didn’t appreciate this one then you just don’t like Star Wars or your mom I guess, because this was a very solid entry in this new series.

It’s very clear at this stage why present timeline Boba is doing what he’s doing thanks to an episode like this and the key flashback moments it showed. Boba was clearly greatly affected by his time with the Tuskens and watching them get screwed over by outsides has to be a huge factor in his mission to bring order to the underworld chaos that goes down on Tatooine.

It’s still not clear what will ultimately drive him back to getting his ship and tracking down Din Djarin for his armor, but we shouldn’t be surprised if it’s some tragic moment that befalls his Tusken tribe that may get him motivated to do so. If he controls the crime, he sets the rules, just like he did with the Pykes and spice, so it makes sense that he came back to Tatooine to help its natural inhabitants at a galactic level versus just in the desert.

Oh, and don’t sleep on Boba being helped out in a time of need in the present timeline by his former tribe, or other Tuskens. I have a feeling his time with them and the deeds he performed will be paid back in a time of need as he continues to try and run Tatooine’s shady side they way he wants to versus the old ways of terror and fear.

Nick and I will talk more about this episode on next week’s episode of the SWTS, so don’t forget to tune into the Star Wars Time Show on a weekly basis via our podcast platforms or via YouTube if you prefer the livestream angle. 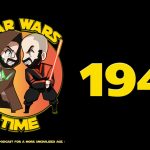