The Bad Batch Season 1 Episode 5, which is titled “Rampage”, is now available to watch, as any good Star Wars fan should, mostly because of the introduction of Muchi the Rancor, a pet we all know and love from Return of the Jedi.

Head on down below for the full Easter egg, Star Wars references, cameos, and key moment breakdown!

Hey now everyone, it’s that time of week to breakdown the latest episode of the Bad Batch, which clocks in as S1E5, aka, Rampage.

Let’s get to all of those eggs, references, key moments, and even a few cameos.

Alright, up first in the eggs and references department is Ord Mantell, which is the planet the Batch heads to to find answers about their new pursuer. This planet was first mentioned in the Son of Dathomir comic book run.

While the Batch is being fooled by Cid, you can see a Dejarik table in the back, and the Ithorian you see just may be Hammerhead from A New Hope. If anything, he’s wearing the same blue getup that his Kenner action figure sported way back when.

Alright, so there’s a lot to unpack in Cid’s office, and I’m sure I’ll miss some of the more random items, but she had a few Clone trooper helmets, possibly a mud horn horn and a Jedi holocron, a hydro spanner or two, and she happens to be voiced by Rhea Perlman. Boom.

Speaking of which, she drops the Are you fresh out of the tube line as a reference to cloning tech.

I’m not done yet with Cid’s office though, because she also has the Proto Fett White Helmet on display, which is a solid ass egg indeed.

Cid is a treasure trove, because she also mentioned Zygerrian slave traders, which were a faction featured in The Clone Wars.

Wrecker drops a reference to Kuat before they begin their attack on the slavers. This planet has been referenced in multiple Star Wars properties, including the Clone Wars.

Echo gets jacked by a Brezack, which is a flying monster of sorts that was also first featured in the Clone Wars.

I loved the Bib Fortuna inclusion in this episode, who is voiced by Matthew Wood, who played him in The Mandalorian, and also voiced Grievous in ROTS among other Star Wars gigs. I have more on this guy and his little piggies later in regards to a pretty cool tie in to the original trilogy.

I guess this can count as a reference to Bad Batch itself, but also has connection back to Rogue One, but we see that Omega kept the clone doll and has now styled it after the Bad Batch.

The shock collars you see the batch wearing are the same ones the Zygerrians used on Obi Wan, Ahsoka and Company when they’re mission on Kadavo went awry in The Clone Wars season 4.

And what do you know, the leader gives us a Kadavo name drop to further reinforce this episodes connection to past clone wars narratives.

Alright, so let’s talk Muchi, who could very well be the coolest Easter egg reveal to date, mostly thanks to what has to be a direct connection to Return of the Jedi. I think we all have to agree that due to Bib’s inclusion via Jabba, that this little girl is none other than the grown ass rancor we see in Return of the Jedi eating twilek babes and pig men, while also trying to take out a force user in Luke Skywalker.

With this speculative knowledge in tow, I kinda hate Luke now for killing poor Muchi, but in all honesty, I love this kind of reveal as it just helps to really tie Bad Batch to the overarching Star Wars narrative, while also providing cool little backstories for iconic character, or creatures in this case.

Two of the captured slaves are Falleens, which is an alien race feared before in Star Wars, most notably via the Black Sun, who were featured in various Clone Wars episodes. If you want to go Legends style, Prince Xizor was also a Falleen.

There’s another nod to the clone wars and it’s slaver arc when homeboy pulls out his light whip.

And to wrap the eggs and references portion, we get a mention of the Bounty Hunter Guild from Cid, who else wants to believe her contact is Greef Karga, aka, Greef Kardboard.

It may mean nothing down the road, but I found it symbolic that Omega was given Crosshairs comm unit. There’s a good chance this is also a bit of foreshadowing, but for now it just shows her becoming more and more a part of the team.

Anyone else get the vibe that Omega sensed Cid rather than guessed? I’m still leaning towards this kid having some force juice, so she definitely sensed her out right? Right?

At this point if you haven’t picked up on the now obvious Wrecker’s busted chip foreshadowing, you’re drunk, because we got another direct nod to it, so be prepared for the big guy to go haywire at some point and really put the Batch in peril.

Not super key, but we did finally get the name of the Batch’s gonk droid, and it’s Gonky. Love it.

We finally learned where Omega got the bow she wielded in the trailers when we see her pick one up from a fallen Zygerrian. This will definitely become her main gear and only takes her one step closer to becoming a fully functional member of Clone Force 99.

I know it was mostly comic relief, but how funny was it watching Wrecker and Muchi go at it, and then bond as a result of their fisticuffs. I love this big goon, which is only going to make his inevitable malfunctioning chip moment that much more problematic.

And to close it out, the Batch learns about Fennec identity, and we get to learn that she is new to the Bounty Hunting scene and working on a direct commission from and unknown source. I still believe that source to be Nala Se or Lama Su, but I guess we can go with unknown for now.

Make sure to tune into the next episode of the Star Wars Time Show in which myself and my co-host Nick will fully breakdown Rampage and give our thoughts on it as a whole. 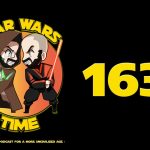