The Bad Batch continues this week with “Cornered”, which features the arrival of Fennec Shand, a character from The Mandalorian who is now getting a bit more fleshed out thanks to this new animated series.

Head on down below to check out our episode breakdown featuring Easter eggs, Star Wars references, and the key moments featured in The Bad Batch Season 1, Episode 4.

Starting with eggs and references we get a few familiar planet mentions and I’m not talking about Idaflor, no I’m talking about The Maker’s planet, Pantora, home to George Lucas’ Chairman Papanoida character and his daughter’s Chi Eekway character. Both first featured in ROTS, but also in The Clone Wars.

I’m not sure if this dude’s name is Raspar Six, or if that’s just his gaming handle, but either way he’s a sullastan like our boy Nien Nunb from the Rebel Alliance.

We knew she was coming, but Fennec’s appearance still counts as a reference thanks to her Mando past, which is in the future from this show, but you get the idea McFly.

The batch wasn’t on Lothal, but that doesn’t mean Lothcats can’t make an appearance!

This next egg could be one of the best Star Wars references to date thanks to the many layers of nods it offers, but the little clone doll that Omega plays with is a fantastic tip of the hat to Jyn’s trooper doll, and the state of the galaxy at this current time. Loved it.

I feel like these little furry things are a callback to something, so here they are just in case, but yeah, drawing a blank on their proper name.

And to round this list out I have to say that the Hunter/Omega/Fennec chase scene had all sorts of AOTC coruscant chase scene feels to it. Everything from the music to the speeders and action beats just felt familiar, so outside of lessons on losing lightsabers and bad Jedi mullets, this chase definitely had some Zam/Obi/Anakin feels to it.

Like I said earlier, we knew Fennec Shand was going to play an antagonist in this series, but it’s now clear exactly who she’s hunting, and it’s not the Bad Batch. She’s just been hired to bring in Omega, so while I initially thought that Tarkin would hire her to take out the Bad Batch, it’s now looking like the Kaminoans have hired her to retrieve Omega for their one last super duper clone experiment to try and regain favor with the Empire.

I found the Clone parade to be another great example at how confused the galaxy was at this point in time. On salucamei the clones weren’t necessarily being heralded as saviors, but on Pantora they were, so the contrast showed how wonky the rollout of the empire was in terms of how the common fold perceived its presence.

It looks like Fennec will be a main foil for the Bad Batch, so I loved seeing just how skilled of a badass she is. While Hunter thinks she’s a bounty hunter we know her to be more than that and it showed. She bested both Hunter and Wrecker in hand to hand combat and gave Hunter a run for his money during the chase, so her assassin skills are definitely up to par to take on our enhanced heroes.

And while this one is a bit silly and has no effect on the Star Wars as a whole, but I have to say that I’m a huge Clink fan, and found him to be one of those memorable Star Wars droids even though he’s just a random side character we will probably never see again. But that damn droid had a great personality, and I loved his old school sci-fi robot look.

Make sure to tune into the next episode of the Star Wars Time Show in which myself and my co-host Nick will fully breakdown Cornered and give our thoughts on it as a whole. 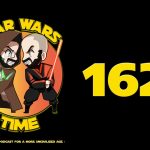