The Bad Batch Season 1, Episode 2 is out now and titled “Cut and Run”, and so is our breakdown of it. Head on down below to check out the episode’s Easter eggs, Star Wars references, and key moments.

Alright you genetic defect clone loving fans, it’s time to breakdown all of the easter eggs, references and key moments from The Bad Batch S1E2, aka, Cut and Run.

In the eggs and references department, we start with the planet Saleucami, which was featured in the Clone Wars Deserter episode from many years ago.

Upon the Batch’s arrival we get to see some familiar Star Wars creatures in the form of the Nuna, or Swamp Turkeys if you will, as well as a Nexu, which is Padme’s favorite beast in case you were wondering.

Of course with the Batch being on Saleucami we knew they’d run into Cut Luwquane, which they do with his wife Suu, who is wielding a 6-2Aug2 hunting rifle, the same model that a famous farm boy will use down the road.

Jek and Shaee are also featured, and Jek shares a name with a force clone from the Lego Star Wars series.

In town we can see that the Empire has adopted its new logo, which is an adaptation on the Republic’s former crest.

While seeking passage off world Cut and Hunter learn about the new Chain code system, which we first heard about in Mando, and they learn about it from an Aleena alien, the same species as Ratts Tyrell from the Boonta Eve Podrace.

This poor Zutton is getting a shakedown, maybe he’s the Snaggletooth we eventually see in the Cantina?

Up next we can see Hunter using an old Jedi Comlink. Neat.

Speaking of neat, here’s a Bith alien. Wonder if he’s looking to join the Modal Nodes.

If you like familiar looking ships, the transport Cut and company are trying to get on is a Star Commuter 2000, which I believe first debuted in Rebels.

Behind the security desk here you can see a Smelter droid, the same model as 8D8 from Jabba’s palace.

Finally, Wrecker uses a gonk droid as a dumbbell. Seems about right.

While I may have been wrong a few weeks back in predicting that the Batch would run into Rex in this episode, at least Cut revealed that Rex did pass through Saleucami to warn him about the inhibitor chips, which Omega also confirms to the Batch, who didn’t realize chips were responsible for the clone programming. So it’s as if Rex has taken it upon himself to find Named clones to try and save them from themselves.

When cut is talking to hunter about Omega, he drops some heavy foreshadowing by reminding Hunter that the Kaminoans don’t create without a purpose when referring to her possible enhancements. This implies that she was created for a specific purpose, and given abilities to meet that purpose. While I think the Force will ultimately be involved, Cut’s suspicions confirm the fact that she’s just not a simple enhanced clone.

Quite frankly, just witnessing the state of the galaxy at this turbulent time has already been a treat. I love how Clones truly were being used as first-get stormtroopers to secure in quotes the galaxy. We also learned that this is the period in which the Empire created the Chain code system to track everyone, as well as their ships with their own unique codes.

Chain codes were first mentioned in Mando way back in season 1 in regards to tracking bounties. Cara dune also mentioned being found out via her chain code, and of course, in season 2, we had the exchange between boba and din to prove his identity via a chain code, so I appreciated learning how this system of tracking started under the Empire.

Now us toy collectors already knew this character was coming from a reveal this week, but we get our first look at Vice Admiral Rampart, who more than likely will become one of the main Antagonists in this series. He’s more than likely a Tarkin suck up, so expect plenty of shadiness and ambitious moves by this dude.

Call me a softy, but I found Cut trying to teach Hunter and Bad Batch how to be Dads was a poignant moment. I mean it obviously had direct implications in this episode with the Hunter and Omega relationship, but it will echo throughout this series as Hunter and the Batch and Omega learn to grow as a new family. It just helped to push the Clones a bit past their warrior mentality, which will be needed as they navigate this perilous new galaxy.

I found the scene where Omega is seemingly reflecting on her journey and possibly feeling bit lost and sad being away from Kamino. The act of removing her head piece and staring at it longingly also hints that it has special meaning, and may have been given to her by someone other than the Kaminoans. If anything else, it’s significant that she removes it and seemingly keeps it off, almost as a sign that she’s already growing and moving on from her past.

Call me sappy, but I did find the whole ordeal in which Hunter felt the need to give up Omega, but then she ultimately returns to him, to be a key moment. It just reinforces their connection, and the fact that Hunter has become her surrogate father. Their relationship has Din and Grogu vibes big time, and this episode reinforces that fact.

Cut and Run may have been a less action intense episode than the premiere, but I still loved its world building, especially all the little nods to what the Empire was doing early on to gain control over the galaxy while posing as bringers of peace. I’m all for this time period, and so far Bad Batch isn’t letting us down with fleshing it out.

Make sure to tune into the next episode of the Star Wars Time Show in which myself and my co-host Nick will fully breakdown Cut and Run and give our thoughts on it as a whole. 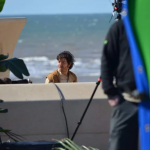 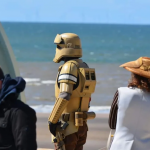