The Bad Batch finale part 2 is now available to watch, and while Season 1 Episode 16, aka, “Kamino Lost”, wasn’t as thrilling as last week’s episode, it still provided some solid setup for Season 2, and a pretty clear connection to the cloning stuff going on in The Mandalorian.

Well Bad Batchers, S1E16, aka, Kamino Lost wasn’t as thrilling as the penultimate episode, but that’s usually how things go with finale’s, which are typically reserved to setup new narratives for the next season, versus featuring juicy revelations about open threads and plot points.

Let’s get on with the breakdown starting with a light smattering of eggs and references.

And by light I mean just one moment of note, which came at the very end of the episode when we see a scientist greet the captured Nala Se.

If you paid attention to the gear she’s wearing you would have noticed a very similar getup to what we saw Dr. Pershing wearing in The Mandalorian. In fact, her patch is a dead give away for it.

One could now argue that this is where Pershing came from, and there’s also some wiggle room to make a case for this lady being related to him in some capacity. He seemed between 30-40 in Mando, so he would’ve been a child during this timeline. I just wouldn’t be shocked if we hear this ladies name and it rhymes with burping.

And now for the key moments and a reminder to sub to the channel if you’re not already subscribed. Oh, likes and comments help too. Cheers.

I found it interesting that the Reg clone who told Rampart that the city was destroyed said it in a way that implied he wasn’t so down with the idea of blowing up his home. I think this is just more foreshadowing for an inevitable clone revolt down the road as it has been made more than clear by now that they can have free will regardless of their chip’s status.

Omega saving Crosshair from drowning was another indication of her righteousness, but it also setup what now appears to be the long game of getting Mr. Happy back to the side of good. It also sets up another chance for Crosshair to do good, which I’ll talk about in a bit.

Speaking of the angry one, he really does love him some Empire, even after they clearly left him for dead, but the key moment here is the fact that his head still seems achy, which may mean his chip isn’t gone after all. Unless the damage to his head from a few episodes back did it, he doesn’t have a chip removal scar and we haven’t physically seen it removed, so I guess there’s a chance he thinks it’s gone, but it isn’t.

I also appreciated Omega calling him out on the fact that she thought his chip made him a dick, but in reality it’s just who he is. I think we may have to keep the jury out on this subject for now due to the clear focus on Crosshair clutching at his head like Wrecker used to before his chip was removed. Last week’s reveal may well have been a distraction, and he may still be influenced from his juiced chip.

In what could be a sign that he may one day do the right thing, Crosshair saved AZI and Omega. If anything, it showed that there is still some good in him, even if it was to repay a debt that he felt he owed her for saving him earlier. Even a little crack in his gruffness could lead to a 180 turn, so this moment is relevant indeed.

And to round things out we have to discuss the Nala Se stinger. I mean we knew the Empire had her and planned to use her skills, but seeing the scientist in Pershing like lab gear hints at what could be a huge tie-in to Mando and the Sequel trilogy.

If this is indeed the same facility that Pershing ultimately comes from and we consider what he was doing for the Remnant Empire in Mando, then it’s not too far of a stretch to consider that we may get a Grogu connection in this series, which quite frankly is something Nick and I predicted many moons ago for a possible plot point to be fleshed out in The Bad Batch.

I’m not saying we’re going to see the little guy in Season 2, but with the ties between Nala Se, Omega, the Pershing lab, and what we know goes down in Mando, it’s hard not to think now that the Batch could be the ones who ultimately have a hand in Grogu’s journey.

We’re  clearly seeing the beginnings of the Empire’s cloning efforts, which we know from existing canon leads to the Remnant wanting grogu for his force blood, and ultimately the creation of Snoke, Zombie Palp, and whatever dark science the Emperor had them dabbling in to ensure his immortality.

It wasn’t the most thrilling finale, as true season finales typically go, but the end moments definitely sets up another go for the Batch and Crosshair to figure their issues out in Season 2. How will the Empire embrace him? Will he regret his choice? Will the Batch try to reason with him again? Will he ever be redeemed? Will his main focus still be trying to take them out?

All of these questions and of course the cloning stuff will be pillars of the show moving forward, so in the end this episode did its job to setup the future.

Make sure to tune into the next episode of the Star Wars Time Show in which myself and my co-host Nick will fully breakdown Kamino Lost and give our thoughts on it as a whole. We will also provide predictions and wants for Season 2. 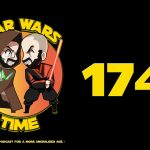