The Bad Batch returned to form in Season 1 Episode 14, aka, War-Mantle, so head on down below to check out the breakdown. Republic Commando fans, you don’t want to skip this one!

The Bad Batch S1E14, aka, War-Mantle got things back on track this week after a rather ho hum episode last week, so let’s not waste another minute and get to the breakdown.

Up first in the eggs and references department we get to see some Star Wars hunting dogs in the form of Massifs, which Clones have used before in the franchise. These ones look a little different than other massifs, but the scholars at wookieepedia confirmed that these were indeed the species.

And those doggies were being used to hunt down CC 5576, who we know as Gregor, a friend of Rex and a character featured in both the clone wars and star wars rebels. I’ll have a bit more on this slightly kooky clone in the key moments section.

We then get to see a few of Gregor’s Clone Commando brothers, who were a more advanced unit of clones and were also featured in the Republic Commando video game.

Echo then gives us a Skako Minor mention, which is a callback to his own rescue during the final season of the clone wars, which also featured him first joining up with the bad batch.

Anyone else get the full on Imperial facility vibes from the installation on Daro? I mean everything from the wall panels, blast doors, and even the score felt very Empire ish for the first time this season. The rescue definitely had hints of Leia’s rescue in A New Hope as well.

You have to appreciate the first mention of TK soldiers in The Bad Batch, and the fact that Gen 1 Storm troopers looked like Ralph McQuarrie’s concept of a trooper from way back when.

The last egg is a pretty legit one, because i’m 100% certain that the Clone commando in yellow and grey armor that requires nearly the full squad of Batchers to take him down is none other than Scorch from the Republic Commando video game I just mentioned earlier. A Delta Squad member could definitely give the Batch a run for their money, and quite frankly Delta was the first version of an elite clone force, so there are all sorts of juicy references with Scorch’s inclusion.

And now for the key moments

I think it is notable how much loyalty Echo still has for Rex. I mean it’s pretty much Echo who convinces Hunter to go on the mission, and then to break into the facility to save Gregor. I don’t think they would have carried out the mission without Echo’s insistence, so his ties to Rex have a direct influence on what the Batch gets into, which could have future implications for how involved they get with the rebellion.

How about getting to see the very first class of real deal stormtroopers? I love these types of moments and definitely appreciated learning more about the genesis of Stormtroopers, what they first looked like, their Clone Commando training, and of course their Ralph inspired design. Their introduction is definitely one of the final steps towards the end of the Clones and their time with the Empire, so it was exciting to see them in action, and already be kind of bad at it as the Batch makes clear more than a few times.

Seeing Gregor get rescued was on my must see list for this whole series, so of course I found the whole mission to be key because I had a prediction win.

We also learned a bit more about Gregor and how he ultimately ends up with Rex in Rebels, and I love the little nugget about him purposefully not training the TKs to be as proficient as clones in combat. One could argue that Gregor is one of the main reasons that the Stormtroopers kind of suck at their job and shoot like they have their helmets on backwards.

Yo, Hunter getting captured is huge and the fact that Crosshair is involved is even bigger. The ordeal Hunter is in will more than likely drive the narrative over the final two episodes. His inevitable rescue will undoubtedly lead to some intense moments and Crosshair’s potential redemption, so don’t go sleeping on the boss getting tied up.

Finally, I have to comment on Rampart’s plans throughout this episode. It was made clear early on that the Empire was making major moves on Kamino in regards to shipping out all remaining clones to somewhere and having suspicions about the Kaminoans. While it’s not clear what his plans are for all the Clones their shipping off world, he did make it clear that Lama Su was no longer welcome within his Empire, so the PM is probably dead.

More importantly, he shows interest in Nala Se’s scientific skills, which could 100 percent be how the Empire gets into its own form of cloning for palpatine and why we see clone tech in The Mandalorian being used by Imperials for nefarious purposes. If anything, Rampart makes it clear that the Empire is done with clone armies and kaminoans, but it is not done with utilizing clone technology for its own sinister plans.

Make sure to tune into the next episode of the Star Wars Time Show in which myself and my co-host Nick will fully breakdown War-Mantle and give our thoughts on it as a whole. 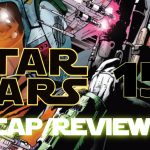